Here to Stay by Mark Edwards 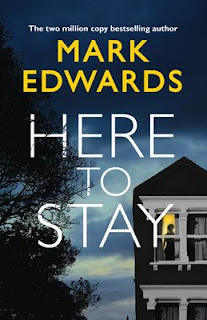 This thriller chillingly explores the folly of inviting strangers into your home. Elliot Foster has a beautiful house and garden in England that he has refurbished by himself. Having begun an educational website that became wildly popular, he was able to sell the site, earning enough money to purchase and remodel his home as well as start a nonprofit to teach science to children in underprivileged areas. Life is good. He is a success at his job and loves the house he has lovingly brought back to its former glory. But then on a fateful weekend, he participates in an Open Garden Event and falls madly in love at first sight. He is ready to call it a day when the lovely Gemma Robinson walks through the garden gate. He is intrigued and even gives her the grand tour of the entire property. As fate would have it, during the course of the tour, he suffers a bee sting and almost dies from anaphylactic shock. Gemma gets him to the hospital in time and saves his life. Consequently, they develop a deep connection and begin a whirlwind romance.

After a mere two months courtship, they elope.  Almost immediately, Gemma hears from her parents saying they will be arriving from France and asking if they can stay for a couple of weeks while they look for a place to stay. Most would feel this was an imposition, especially newlyweds, but having lost his parents to an accident at the age of eighteen, Elliot is anxious to meet his new in-laws and thrilled to fill the house with family. Unfortunately, this is where life as he knows it ceases to exist. Her parents arrive with Gemma’s sister, Chloe, who is said to be ill and doesn’t speak or leave her room. The parents are a nightmare, crude and messy, turning his beloved house upside down. It soon becomes evident that leaving is the last thing on their minds—they are here to stay. After almost a month with no sign of relief, Elliot begins to suspect his whole marriage is a sham with Gemma targeting him and his property rather than serendipitously showing up on the day they met. Nothing makes sense.  He can’t explain the scars on her body she refuses to discuss or her obvious lack of affection for her parents. Elliot doesn’t know what to believe, but decides to look into the background of his in-laws, hoping to find a way to force them to vacate the premises. And that’s when the terror really begins.

This book was an easy read and kept me intrigued throughout. There are numerous twists and turns and I found the whole concept mesmerizing. Could someone really move into your house and just refuse to leave?!  How far would you go to get rid of them? I made the mistake of reading this book late at night and almost scared myself out of a good night’s sleep! It is fast-paced and engrossing, I definitely recommend it.
Posted by BPL Ref at 9:12 AM