Guest reviewer Kevin Tipple is back with his review Archer Mayor's Bomber's Moon.  Check out his blog Kevin's Corner for more book reviews and book news, as well as links to topics of interest. 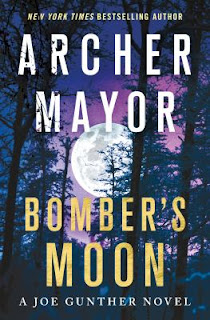 Reviewed by Kevin Tipple
The thirtieth novel in a very good series by Archer Mayor, Bomber’s Moon: A Joe Gunther Novel, opens in the winter time in Vermont. There is a man who is very good at his job. Unfortunately for some folks, Alex Hale’s being good at his job means their stuff gets stolen. For a certain someone, that theft will cause the potential of a secret going back decades to be exposed and that can’t be allowed.

Joe Gunther and his team in the Vermont Bureau of Investigation, the VBI, are about to have their own case in Bellow Falls. The murder case of Lyall Johnson seems pretty straight forward on the face of it: a guy named Brandon Leggatt knifed him over drugs and fled the scene. A fight between low life criminals who have very long rap sheets going back many years covering a wide ranging list of petty crimes indicates that things led to the always inevitable conclusion. Joe Gunther has been doing this job for a lot of years and he is sure from the start that something more is at work.

At the same time, Sally Kravitz, private investigator, is hired for an infiltration and surveillance job. Something is rotten at Thorndike Academy. What exactly is wrong is vague and nothing more than a nagging suspicion that her employer has at this point. One of those deals when you know something is off, but you just can’t quite put your finger on it. He wants confirmation. She soon needs some help and enlists Rachel Railing, a reporter, who is moving into the investigation side of things.

The above explanation not only greatly simplifies the various situations, it also barely scratches the surface of this latest very complicated novel in the series. Things escalate quickly on all these fronts and more in this highly entertaining mystery. Long time readers very familiar with these characters and their evolving situations will find much to like in this latest installment. All the usual suspects are back and the only real question is how well they play together with their often differing and clashing agendas.

Bomber’s Moon: A Joe Gunther Novel is another mighty good read in a series full of them. Sure you could start here and it would work, but what is the fun in that? Go to the beginning and start with Open Season.

Material came from the Mountain Creek Branch of the Dallas Public Library System.