The Dark Angel by Elly Griffiths 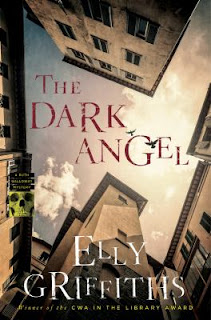 British archaeologist Ruth Galloway receives a call from an Italian colleague, asking if she will come to Italy to help him with an excavation near a small mountain village where he has uncovered some interesting remains.  Angelo Morelli has been working with a film company (who is helping to finance the dig) but they are losing interest.  He thinks that if Ruth comes, that as a “foreign expert” she might re-ignite some enthusiasm—and funds.  He offers Ruth the use of an apartment and encourages her to bring her young daughter, Kate, as well as another friend and her son. It will be a holiday of sorts, expenses paid.

Intrigued by both the promise of a holiday and by Angelo’s talk of “anomalies” with the skeleton he has found, Ruth sets out.  She soon discovers that her presence isn’t welcomed by all and that even Angelo is claiming to have received threats.  Is it about the Roman archaeological site—or more recent history?

But as fans know, the Ruth Galloway books are much more than mysteries; they’re a chance to find out what is going on in the complicated lives of a fascinating group of characters.  The core relationship is that between Ruth and DCI Nelson, the married police detective who first brought her into the realm of murder investigations when he called her in to consult after bones were found near Ruth’s home in the saltmarsh, but all the characters introduced since then have gone on to live very interesting lives. Sometimes I have to remind myself that there’s a murder to solve, but I’d rather find out what is going on with Cathbad, Clough, Judy, et al.

Griffiths does an excellent job of creating characters we care about, even the ones who may seem unlikable at first.  They may still be people we don’t love, but we at least understand—like in real life. Ruth is a wonderful creation; she’s intelligent, independent, thirty something who is extremely competent at her job, but somewhat less organized in her personal life.  She’s also unfashionable, overweight, and sometimes socially awkward.

The books also have a streak of understated humor.  I particularly enjoyed this exchange in Dark Angel when Ruth reluctantly refuses a second helping of delicious pasta, the village priest encourages her by saying, “You young women are too thin.”  Griffith writes, “It is almost enough to make Ruth become a Catholic.”

Given the strong part that character plays in these books, I highly recommend that they be read in order.

The Crossing Places
The Janus Stone
The House at Sea’s End
A Room Full of Bones
A Dying Fall
The Outcast Dead
The Ghost Fields
The Woman in Blue
The Chalk Pit
The Dark Angel
The Stone Circle (due in May, 2019)
Posted by BPL Ref at 8:58 AM