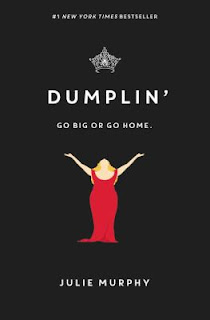 In the past when I’ve watched a movie then read the book, I’ve usually ended up liking both. (The same can’t always be said for vice versa). Watching Netflix’s Dumplin’ then reading the novel of the same name by Julie Murphy was a little different – there was a clear winner. That’s not to say I disliked either of them, I enjoyed both. But if I had to pick which I prefer, it would be the movie.
Dumplin’ is about an overweight Texas teenager named Willowdean trying to conquer her insecurities by signing up to be in the local beauty pageant. Her beautiful, thin mother was Miss Teen Blue Bonnet many years back and has been reliving her glory days (by being pageant coordinator) ever since. Willowdean initially signs up for the pageant in part as a tribute to her beloved, recently deceased Aunt Lucy. But when a handful of high school misfits follow her lead, she becomes the de facto leader of an accidental revolution. Willowdean as a character is great. She’s sweet and fun but tends to snap unfairly at people when she’s feeling insecure. She is also self-aware of her flaws and tries to course correct accordingly. A whole motley crew of teens decides to compete and slowly becomes Will’s friends: another overweight (but cheerier) teen Millie, sullen, bucktooth Hannah, and Amanda who is teased relentlessly for the corrective shoes she has to wear. Will also has to contend with her crush on her co-worker Bo and her classmate Mitch’s crush on her.
Dumplin’ is a fun story with a good message: no one should have to conform to others’ expectations of beauty. Julie Murphy's book version does feel like it gets a little repetitive at times, however. Will has insecurities about the pageant or Bo or Mitch or something else. She talks it out with someone (or herself), feels better for a while, repeat. The movie, by necessity, tightens up the story and makes it flow a little better. It also trims excess characters (goodbye Amanda and Mitch) and softens the harsher aspects of other characters’ personalities (particularly Will’s mother who is kinder, prouder, and generally more present in the movie.) The movie can be cheesy at times, and the southern accents are…not great. But everyone is trying, bless their hearts. It is the definition of a feel-good movie, and it has the welcome bonus of a Dolly Parton soundtrack. While I preferred the movie overall, I don’t think you can really go wrong with either one when you need a little pick-me-up.
Posted by BPL Ref at 10:07 AM