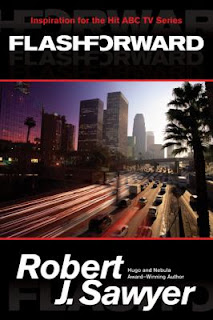 Scientists Lloyd Simcoe and Theo Procopides hoped to prove the existence of the never-before-recorded Higgs Boson, a subatomic particle, using the Large Hadron Collider at CERN.  Using the largest blast of energy in history, the physicists press the button to begin the experiment and then—nothing.

Two minutes and seventeen minutes of nothing, to be precise.

At that exact moment, at 17:00 in Switzerland, every single person in the world blacked out for just over two minutes.  People fell down staircases; automobiles crashed; planes fell out of the sky.  Some people saw only emptiness, but most saw a vision in which they seemed to be observing themselves at some point in the future.  When the smoke cleared and notes were compared, the theory developed that the visions were of a time about twenty years in the future.  Somehow, something had caused the entire human consciousness to jump into the future, then back to the current day.  No one could definitively prove how that happened, but Lloyd and Theo had a strong suspicion that their experiment caused the time jump.
This phenomenon threw the entire world’s population into chaos.  Some people thought that those with no visions would be dead at that point in the future.  Those who found themselves in bed with an unknown person suddenly questioned their current relationships, or began to seek out the new person in their “destiny.”

Could the “flashforward” be recreated?  Should it be?  Could everyone on earth be warned in advance so that no one was in any danger of hurting themselves if they lost awareness again?

While listening to this book in the car during my daily commute I quickly became immersed in the predicament of the CERN scientists.  Who had the right to decide if the experiment should be repeated?  What unforeseen consequences might happen?  Did people have free will to change the future?  The fast moving story carried me along as Lloyd, Theo, Michiko, Doreen, Dimitrios, (and everyone else in the world) discovered their destinies.

I didn’t understand much of the particle physics, (don’t tell my physics professor husband!) but the good thing is that you don’t have to be a genius in order to understand this book.  If you can be satisfied that the scientists at CERN were planning to smash tiny little things together in a 27-kilometer underground circular tunnel in order to prove that some other tiny little things were hidden in there too, then you’ll be fine with the science in the book.  The author moves the story forward with strong characters and such a ridiculous premise—that we might be able to be temporarily propelled into the future—that I was intrigued.

Another interesting point is that this book was published in 1999, and the date of the “flashforward” was April 21, 2009, a date well in the future at that point.  The collective consciousness of the human race was jumped to 2030, a time that seemed much more futuristic in 1999 than it does now in 2017.  Ah, time passes.  It passes in the real world as well as in Sawyer’s fictional world.  What will our future hold?  Short of a time jump phenomenon, I guess we’ll just have to wait to find out.
Posted by BPL Ref at 9:41 AM