Checked Out by Elaine Viets 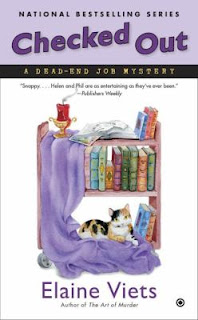 Private investigator Helen Hawthrone has been hired to shelve books at her local library.  Actually, that’s just a cover: she’s actually searching for a small watercolor painting thought to have been in a book that was part of a donation to the library, one among hundreds and hundreds of books.  The painting is actually a John Singer Sargent original and worth up to a million dollars, which is why Helen isn’t the only one searching.  There’s also the matter of the library ghost.  . . .

Meanwhile, Helen’s investigator partner and husband, Phil, is busy posing as a gardener at a local estate.   A valuable necklace and a golf cart have gone missing, and the family is sure one of the servants is to blame.

This was my first foray into the Dead-End Job Mystery series.  A friend had recommended it, assuring me there were cats.  Cats are my fall-back, in case I don’t care for plot or characters.  In this instance, while the cats were welcome, they weren’t the only reason to enjoy the books.  Helen and Phil are an adorable couple, very much in love, but also smart and competent. They put me in mind of Nick and Nora Charles or Jennifer and Jonathan Hart: romantic banter but the partners are equal, and there’s a real mystery (or two) to solve.   There’s a selection of returning supporting characters, my favorite being Margery Flax, their landlord and friend who presides over her tenants like an eccentric aunt.

The suspects and motives were well defined, and I like the methodical and professional way that the two investigators go about their business.  That was something I didn’t realize I’d missed while reading a slew of cozies: people who have a plan, instead of characters more or less waiting around for a clue to show up.

The part that I enjoyed most was the background setting.  Her descriptions of how a library works ring true:  for example, the eternal debate whether to shelve series alphabetically by title or numerically, by series order.  It’s a small thing, but it tells me that Viets has done her research and gives me confidence in areas I don’t know well, such as how one would get rid of a hot golf cart.  I even looked up Sargent’s watercolor alligators and highly recommend others do the same: they are indeed lovely.

Another point in the book’s favor was the shrewdly observed social commentary.  There are the usual class distinctions, but with a Florida twist that includes the “old families” vs. residents vs. seasonal residents.  The problem of homelessness comes up as well and is considered in an even-handed manner.

This particular book even had a bonus cat, in addition to the series regulars. Paris is the library cat whose proposed ouster causes a ruckus similar to ones I’ve heard about from other libraries. (Browser the library cat was one of the more recent ones.)

I will definitely be reading more in this series.
Posted by BPL Ref at 9:33 AM