The Moon-spinners by Mary Stewart 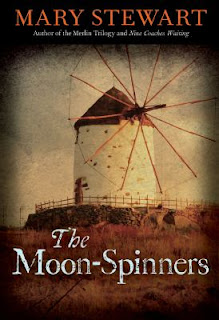 Englishwoman Nicola Ferris has been working in Greece for a year, but now is on holiday in Crete.  Her cousin, an avid naturalist, is coming to visit her and the two plan to do a lot of hiking to look for various local flora.  On her walk to the hotel, Nicola is distracted by the sight of an egret flying nearby.  She follows it, and discovers (or more accurately, is discovered by) a Greek man and an injured Englishman who are hiding in the hills.  They warn her off, telling her to go on to her inn and forget she’s ever seen them.

She does the former, but of course not the latter. She’s determined to help both men. The question is, who can she trust?

The Moon-spinners is considered one of Stewart’s best known works.  It certainly has all her mystery trademarks: wonderfully detailed, evocative descriptions of a foreign land, a strong and resourceful heroine, lots of suspense and a touch of romance.   Even though the book was published in 1962, it doesn’t seem dated at all--no cell phones, of course, and a bit more smoking than is usual in contemporary novels. Otherwise, there was nothing to suggest it wasn’t a recent book.

I also like the smooth way Stewart explains her heroines’ talents.  In this book, for example, Nicola has been working in Greece, which explains why she is fairly fluent in Greek.  The islanders assume she only speaks English and she is clever enough to let them continue to think that.

I have to say that while I liked this one a good deal, I still prefer My Brother Michael.  The setting is similar but somehow it appealed to me more. I think part of it has to do with childhood memories: back in the day, Disney made a movie based on the book, starring child actress Hayley Mills.  Mills was a good bit younger than Nicola—a teen, in fact—so the story was re-written to suit.  I remember seeing the movie, split into episodes for the weekly Disney TV show, and was unimpressed.  It was certainly no Scarecrow from Romney Marsh (ah, Patrick McGoohan!) and I found it boring.  While the book was certainly not boring, I did pause at intervals, remembering little bits from the movie—primarily the windmills, which figure into the plot.

In short, this is a very good romantic suspense novel with a wonderful exotic location and well developed characters.  I’ll be reading more Mary Stewart novels in the future.
Posted by BPL Ref at 9:05 AM