This year, Bristol Public Library and the Avoca Branch Library offered a Summer Reading Program for adults in the form of BPL Book Bingo.  Participants had a bingo-type card except that in place of numbers were categories such as “Read a book written before 1900” or “Watch a movie based on a book.” I had intended to just read enough for one or two bingos.  Instead, I ended up doing “Blackout Bingo,” i.e., completing all the squares on the sheet, even though I had to stay up way past my bedtime to get all the reading done.  The reason I became so enamored was that it got me out of my reading rut and enticed me to make inroads on all those books I had always meant to read but had put off reading.  Here’s a sample of three books I read for the challenge: 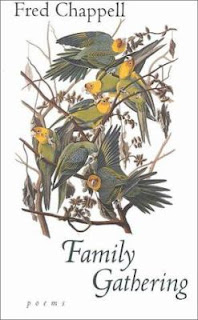 Family Gathering by former North Carolina Poet Laureate Fred Chappell satisfied both the requirement for reading a book of poetry and my pledge to myself to sit down and read something by this North Carolina author. The title sets up the theme of the collection: family gatherings, warts and all.  There are portraits of individuals of all ages, from young Elizabeth who is “Priss-proud in her finery and bored/Bored bored” because the grownups aren’t admiring her to Grandma Settle, who pages through the photo albums and reveals the dim past, back before “the wars arrived, and all the lads/Were handsome, tall, and brave, and none was dead.” Satire, humor, and pathos await the reader, rather like the classic Spoon River Anthology by Edgar Lee Masters. 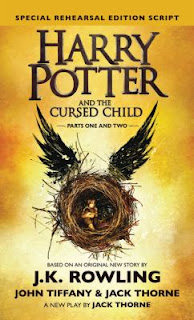 Even though I count myself a Harry Potter fan, having read all the books, visited the amusement park, and seen most of the movies, I had not read Harry Potter and the Cursed Child.  Not only were the reviews on it a bit mixed (some loved it, some loathed it), but theatrical scripts are not among my favorite choices of things to read.  Still there was that square which asked me to “Read a play,” so I decided to give it a try.  I was pleased to find that I wasn’t nearly as bothered by the format as I had thought.  I believe it’s because my familiarity with the J.K. Rowlings’ magical realm enabled me to visualize settings and people, and part of my enjoyment became thinking of ways certain scenes could be staged. As for the story itself, there were parts that I liked very much indeed, but there were others that made me a bit sad—yet I could see why this or that might have happened, even if I didn’t like it. 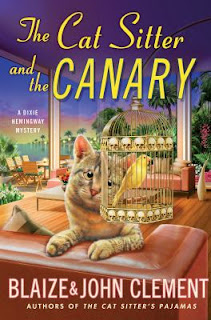 Finally, I chose The Cat Sitter and the Canary by Blaize and John Clement to fulfill my “Read a book in a series” requirement.  This was much more my usual fare (cozy mystery with a kitty or two), and I had read all the others in the series to date.  Dixie Hemingway works as a pet sitter in picturesque Siesta Key, Florida where she encounters murders on the basis usually found in such series; that is, at least one a book.  The series was begun by Blaize Clement but continued by her son, John, based on conversations they shared before her death.  The books have been just a bit uneven since, sometimes relying very much on a checklist sort of events.  This one involves finding a dead body in a client’s home and a mysterious tourist who seemed to have lost his key to his rented house.  The writing was smoother than in some entries and there were signs that upcoming changes may shake up Dixie’s world.  I’m not sure how I feel about that, but I’ll reserve judgment until I see for certain where things are going.  I may find it’s just what the editor ordered to keep the series fresh.

The exciting news is that BPL Bingo is returning this winter!  Starting January 2, you can pick up a Bingo sheet at Main or Avoca to participate.  We do have some small prizes to award for those who accomplish enough tasks to get Bingo.  The game will run until February 28, giving everyone extra time to win--er, read!
Posted by BPL Ref at 9:44 AM