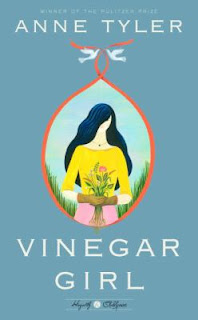 Kate Battista feels stuck.  Having dropped out of college, after a heated altercation with one of her professors, Kate has taken to overseeing her eccentric father’s home, babysitting her air-headed younger sister, Bunny, and working at a local preschool to help make ends meet.  Despite her best intentions, she always seems to land herself in trouble.  If it isn’t Bunny bringing boys home or her father forgetting his lunch (again), then she’s being called into her supervisor’s office because the parents don’t care for Kate’s unfettered cynicism or her blunt-edged honesty.

And then, quite suddenly, her father drops a bombshell:  his lab assistant, Pyotr, is on the verge of being deported, putting their entire project in peril—unless Kate can find it in her heart to help them.  Kate, however, wants nothing to do with their cockamamie plan to keep Pyotr in the states; in fact, she’s furious they would ever consider having her marry a complete and utter stranger.  But, as Pyotr and her father try to bring her around, Kate finds herself thawing just a little more each day and thinking, maybe…just maybe, their plan might work after all.

Vinegar Girl, a reimagined version of Shakespeare’s Taming of the Shrew, is an interesting novel, to say the least.  A little odd, yes, but it was strangely compelling.  I couldn’t help getting wound up in Kate Battista’s life, couldn’t help wondering what would happen as she struggles to deal with her wild child sister, tries to corral her father’s mismanagement, and fend off Pyotr’s unexpected affection.  I was somehow hooked by her story, and I found that I simply couldn’t put this book down.

I’ve never read anything by Anne Tyler and, oddly enough, I’ve never had the opportunity to read (but I have seen) The Taming of the Shrew.  Despite my lack of exposure to both writer and inspiration, I thoroughly enjoyed Vinegar Girl.  First off, I feel like I should note that Tyler is a wonderful writer.  There’s a quality to her work that drew me in from the first page, a cadence to the narration that made the story appealing on a visceral level, a way the characters were made that kept me coming back for more.  I grew to appreciate the plot, the characters, the subtle shifts in language as Kate changed her mind and new layers were added to her relationship with Pyotr.  Personally, I enjoyed the journey.

Moreover, Tyler is a descriptive writer.

As a reader, I hate when authors don’t set the stage, when they don’t offer descriptions of their characters or give weak descriptions about the scene.  Tyler, however, does a wonderful job of bringing her characters to life, showing off the little details that make them unique and, confidentially, intriguing, and unfolding an entire world on the pages.  She helps me sink into the story, helps me feel like I’m really there with Kate as she weeds her garden or as she walks the few blocks to her father’s lab because he forgot his lunch (again) or fights with Bunny over the boy she wasn’t supposed to bring into the house (again).

Plus, I found Kate to be singularly enjoyable.  She’s headstrong, she’s fiery, she’s brutally honest and blunt even when speaking to small children, and she’s incredibly intelligent.  Tyler crafts a compelling and sympathetic character in Kate, creating a complex female heroine who is pulled in many different directions by her loyalty to her family, her interests in her own career, her dreams for herself and her own indomitable sense of independence.  She’s frequently sharp and a bit caustic, but her prickly personality is simply part of her appeal.

Some part of me did wish for more and for better opportunities for Kate Battista.  I wished she wasn’t so constricted by her family, confined by their subsequent eccentricities and individual challenges—that she wasn’t thrown into such an awkward situation with Pyotr.  It just seems like she sacrifices so much for her family, for the people she loves and, honestly, it feels a bit unfair to her.  But, I suppose, if she’s happy with how things turned out, who am I to judge?

Note:  This is one in a series of books by famous authors who are presenting fresh versions of various Shakespeare plays. The Hogarth Shakespeare series will include Jo Nesbo's version of Macbeth, Gillian Flynn's retelling of Hamlet,  and Margaret Atwood will retell The Tempest.
Posted by BPL Ref at 9:26 AM