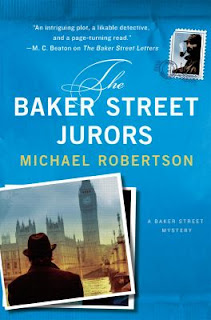 Reviewed by Jeanne
When Nigel Heath of 221 B Baker Street receives a jury summons addressed to “Mr. Sherlock Holmes,” he does what he feels is the sensible thing:  he folds it into a paper airplane and sails it out the window.  After all, the requirements of his lease state that he only has to answer letters addressed to the fictional occupant of his address, and a legal summons doesn’t exactly qualify.  Unfortunately for Nigel, the next summons to that address does have his name on it, and so he finds himself in a jury pool for the newest “Trial of the Century.” Liam McSweeney, a famous cricket player and the hope of England in an upcoming match against New Zealand, is accused of murdering his wife with a cricket bat.  The media and public are in an uproar, less interested in whether or not he’s guilty than whether or not he’ll be allowed to play.

An unhappy Nigel finds himself chosen as an alternate, but is determined to do his best.  He quickly discovers he’s almost as interested in his fellow jurors as he is in the case itself.  Nigel’s especially intrigued (and attracted to) a lovely lady with a tattoo he can’t quite see—but he’d certainly like to get a close look.  There’s also a tall, thin man named Sigerson who smokes a pipe, says he’s a musician, and seems to quote Sherlock Holmes a lot; an irritable businessman who seems to have a lot more than the case on his mind; and  a judge’s widow with definite ideas on how the trial should be run. Between the trial and his fellow jurors, Nigel has quite a number of mysteries on his hands.

The Baker Street Jurors is the fifth in the Baker Street Mystery series and a fine place to start if you want to just jump in.  They’re light mysteries, with a bit of humor, and a clever set-up with the tie-in to Holmes. I was hesitant to start this one as a previous reviewer had described it as slow moving and tough to get into, but I didn’t find that at all.  Also, the previous books tended to feature Nigel’s brother, Reggie, in the main role and I wasn’t sure how Nigel and I would get along.  As it turns out, fine. I wouldn’t describe Baker Street Jurors as compelling, but it was enjoyable. I did figure out some of the secrets along the way, but the ending was a surprise.  This is a good choice if you’re in the mood for a relaxing read instead of a nail-biter.
Posted by BPL Ref at 10:18 AM