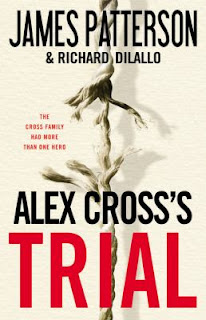 A new James Patterson book?  (Must be Tuesday.)

James Patterson is such a prolific writer that many readers find it hard to keep up with his publishing schedule.  Because he is such a popular author, I finally made the time to begin the Alex Cross series.  Even though it is not the first in the series, I spotted Alex Cross’s Trial and decided to give it a try.  As it turns out, this is a historical account “written” by the fictional Washington D.C. police detective Alex Cross, about events that transpired in the racially charged South during the early part of the twentieth century.

Ben Corbett is a white, Southern-born lawyer fighting for the poor and oppressed in Washington, D.C.  His wife Meg would rather he work his way up the ladder of a more prestigious area of the law, but Ben is summoned to the White House by none other than Theodore Roosevelt to investigate rumors of lynchings in the south.  At great risk to himself and perhaps to his family, Ben travels back to his hometown of Eudora, Mississippi.

Abraham Cross, great-uncle to Alex, is living in the muddy African-American community called the Eudora Quarters  If something happens in the Quarters, Abraham or his granddaughter Moody are sure to know about it.  Abraham accepts Ben into the community, although holding him at arm’s length in some ways.  After all, even if President Roosevelt sent this white man to investigate the local state of affairs, Abraham still must be a little wary.

Violence erupts from the already simmering state of racial unrest, and Ben is called upon to support the prosecution of a legal case against the White Raiders—several white men charged with attacking members of the black community.  If this was not a precarious enough position for a local boy who had run off to lawyer in the nation’s capital, the judge appointed to preside over the trial is Ben’s father, the Honorable Everett J. Corbett.

I found this book to be a great place to jump into the Alex Cross saga.  Currently at twenty-four books and counting in this series, James Patterson writes fast paced dramas.  With the telling of this story, Alex Cross attempts to pass on to his children what his grandmother, the famed Nana Mama, had passed on to him.  If you prefer to start with the very first Alex Cross book, come to the library and check out Along Came a Spider.
Posted by BPL Ref at 9:16 AM