No One Else Can Have You by Kathleen Hale 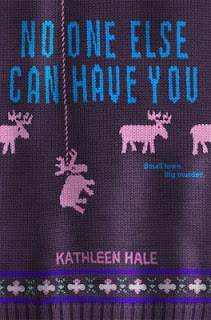 After finishing the excellent season 2 of FX’s Fargo, I was still very much in the mood for a quirky, mid-Western murder mystery. I didn’t realize this until I just happened to stumble across Kathleen Hale’s young adult suspense novel No One Else Can Have You. Kippy lives in a sleepy town in Wisconsin. She really doesn’t have a lot of friends, just her best friend Ruth. She soon doesn’t have her either when Ruth is murdered one night as she’s walking to Kippy’s house.

When Ruth’s grisly murder is discovered the town is left shaken. People are frightened and wish more than anything for the town to go back to its normal, polite, and unafraid self. They want an arrest, and they want it now. Police believe all signs point to Ruth’s arrogant and cruel boyfriend Colt. Kippy, however, is not so sure. Yeah, Colt’s a jerk. An awful person even. But for some reason the idea of him as a murderer is just not clicking.

Ruth’s mother entrusted Kippy with Ruth’s diary (for translation purposes – Ruth’s handwriting was atrocious), and Ruth had her share of secrets. But as far as the police are concerned their job is done. Kippy’s instinct tells her no, and she decides to conduct her own investigation.

I really wanted to like this book more than I did. It had potential but it just never fully reached it for me. While a part of me liked Kippy, a lot of her characterization rang false. She did things that made absolutely no sense other than to up her “quirk” factor or move the story along. One particular instance made me want to give up about 250 pages in. Instead I skipped to the end to see who the murderer was (my hunch was right) and skimmed the rest. It never did seem to pick up. I hate not finishing books but I was far enough in to realize it just wasn’t for me. A fun premise with a shoddy execution is one of the biggest book bummers.
Posted by BPL Ref at 9:17 AM

Email ThisBlogThis!Share to TwitterShare to FacebookShare to Pinterest
Labels: Kathleen Hale, murder mystery, No One Else Can Have You, Wisconsin, YA, YA novel