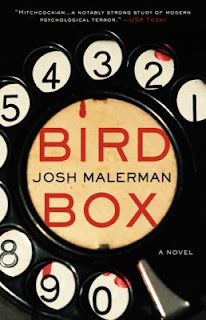 Malorie has lived alone in her house for years with her two children. They don’t have running water. They cover all the windows with heavy blankets. The children only have makeshift toys, and must sleep in a cage every night. When any of them do venture outside, for well water mostly, they must do so with blindfolds on. They do all this to protect themselves from the epidemic that took every person Malorie’s ever known away from her. They cannot look outside lest they accidently glimpse the entity that causes anyone who sees it to become violent enough to murder or commit suicide.

Malorie has lived like this for almost five years. This is the only life her young children have ever known. She has raised them since babies to be cautious, to wake without opening their eyes automatically and most importantly to listen. She has trained them exceedingly well and while she’s had to be harsh at times it was always in their best interest. She worries about their unusual upbringing. She wants them to experience the normal joys of childhood. But Malorie has already decided she will leave the shelter of her home and head out on the river with her children. Blindfolded, of course. Their rigid upbringing and unwavering obedience to their mother has kept them alive but for what? What kind of future can they have as long as they must live this way?

Bird Box is told through alternating timelines: when Malorie, and the rest of the world, is first experiencing this strange epidemic and later on when Malorie and her children embark on their mysterious journey. As she travels down the river, the reader has no idea where she is going or why she thinks it’ll be safer than the tightly locked up house she was occupying. As she rows, she thinks back to the time when she first arrived at the house. Pregnant and scared, she was welcomed in by the assorted inhabitants.

It’s been a long time since I was itching to get back to reading a book like I was with this one. I enjoy a lot of the books I read but lately they weren’t the “I HAVE to get back to it RIGHT NOW” variety. This one was. It was especially heart wrenching to reach a chapter cliff hanger just as my lunch break was over. While I was more eager to learn about Malorie’s past (what happened to all her housemates?), the river sections definitely had their tense moments as well (and WHERE is she going?). I did think it was odd that she never thought to name her children (she just calls them Boy and Girl) because she doesn’t have time to think of “luxuries” like names. Malorie is constantly worrying about whether or not she’s a good mother and what this kind of childhood is doing to her children. So I just find it a little bit hard to believe that she wouldn’t have named them just to give them some sense of normalcy if nothing else.

But that’s a minor quibble. It doesn’t take away from the rest of the novel or the growing sense of dread that is slowly building throughout. Malerman has a cinematic way with words and imagery which helped elevate this book to one of the scarier ones I’ve read in a long time.
Posted by BPL Ref at 2:21 PM