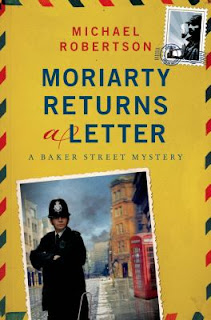 This is the fourth in the Baker Street Mystery series by Michael Robertson.  The premise is that whoever rents certain business suites ends up as the guardian of letters sent to the building’s fictional occupant, Sherlock Holmes.  The present tenant is Reggie Heath who, along with his brother, Nigel, is expected to send out responses to the letters. For me, the series has been a bit uneven.  The first book didn’t grab me, but the next two were delightful.

Which brings us to book number four, Moriarty Returns a Letter.  The story opens in 1893, with an American undercover agent being held by a gang.  He’s been setting them up, but now they’re suspicious and he is in mortal danger.  Then the scene shifts to 1944, when an American officer enters a pub. Finally, the timeline moves to 1998 (aka “present day”) where first a strange young woman is saved from the river, before the appearance of the series regulars.

Reggie and his fiancée, Laura, are planning an elaborate engagement celebration when he’s called upon to bring in samples of some of the Holmes letters.  A local hotel is mounting an historical exhibit involving other local businesses, and Reggie is expected to help set up the display.
And then events really start to move. . .

As you may gather from the above, describing the book is a bit difficult.  I found it somewhat slow going until we reach the present day, but from that point on the story moves at a quick pace.  The characters are well done, humor and drama co-exist compatibly, and the result is a memorable story.  This is especially true for those who have read the third book in the series as a character from that book returns.  The books feature mystery, some romance, and some chuckles. I don't know how someone unfamiliar with the series would react.  If you are unfamiliar with the series and do decide to give this book a try, by all means let us know here how that turned out!

Reviews of the two of the previous books are here. The series order is:
1.       The Baker Street Letters