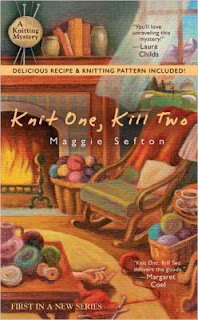 
When Kelly Flynn returns to Colorado for her Aunt Helen’s funeral, she suspects the police have found the killer and solved the crime of her aunt’s murder.  But after she learns her aunt withdrew over twenty thousand dollars, Kelly knows something is amiss—something that can’t be explained away by the police.

Plagued by the inconsistencies of her aunt’s demise and the disappearance of family relics, Kelly decides to do some digging of her own—and what she discovers shocks her.  Helen had a secret, a secret that Kelly never expected from her bright, caring aunt.

Knit One, Kill Two by Maggie Sefton is a quick, easy read.  It’s intriguing, splashed with a dash of dark scandal to make it scintillating.  As I was reading, I was curious to see how things turned out for Kelly Flynn as she hunts for a killer and looks to unravel an incredible secret from her aunt’s past.  It’s a decent novel with just a hint of romance—and knitting pointers.

Although I found it easy to pick up Sefton’s novel and jump right in, I was a bit disappointed.  Knit One, Kill Two didn’t hold my attention for long periods of time.  It’s simple, easy-to-read, and it has enjoyable moments, but it’s a book that, once I figured out the mystery and discovered the real killer, I was hard-pressed to actually finish reading the book.

Moreover, I noticed that some of the subplots were left dangling at the end.  There’s no resolution to Kelly’s little side adventure and there’s no real build-up of Kelly and Steve’s relationship (if it could be called that), which I found disappointing.  Not only was I left with more than a few questions by the end of the novel (which, I would hope, the author clears up in her next book), I wasn’t thrilled with the character development.  Many characters, including Kelly, felt a little lackluster, a little stiff like cardboard cutouts.

Overall, it wasn’t a very memorable story and it didn’t beckon to be read immediately.  Luckily, it’s easy to finish in a day—maybe, even an afternoon—and set it back on the shelf.  On the bright side, it actually has a pretty good recipe for cinnamon rolls, so that’s a nice reward for finishing the book (well, that is, if you like to cook).
Posted by BPL Ref at 12:35 PM