The World According to Bob by James Bowen 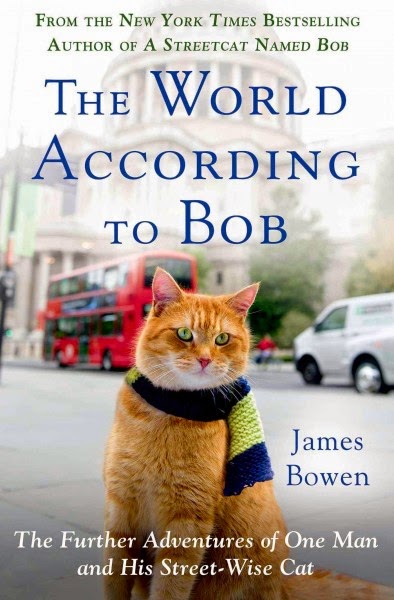 Londoner James Bowen was a struggling drug addict, living in government housing, trying to find some direction in his life.  He earned some money by busking (street performing) and by selling copies of The Big Issue. One morning he finds an injured orange cat and offers aid.  To steal a line from “Casablanca,” it was the beginning of a beautiful friendship.

It also produced an international best-seller, A Street Cat Named Bob. (You can read our earlier review here.)  The story of a young man and a stray cat tugged heart-strings all over the world.  It was on the UK best-seller lists for 52 weeks and has been sold in 26 countries.

Naturally, this meant there had to be a sequel, hence The World According To Bob.  Actually, “sequel” is a bit misleading because it covers much of the same time period as the first book.  The difference is that Bowen goes into a bit more detail about the struggles he faced and more about his bond with Bob.

For the first book, there was more than a little concern about how the reading public would take to a book about someone who was, shall we say, not a member of mainstream society. In this second book Bowen is able to speak more honestly about his life. The result is a moving and memorable account of life when one is truly down and out.  Part of Bowen’s appeal is that, while he decries parts of the system, he is forthcoming about his own role in his problems.  He takes responsibility for his own actions.  Another part is that he gives us some insight into what it’s like to be without resources and at the mercy of authoritarian whims.  We can understand his frustration even as we can see the other side of it.

Bob the cat is as charming as ever, whether he’s checking to see if an ill James is still breathing or fighting off a mugger.  James is in awe of a creature so loyal, so loving, and above all so trusting.  Bob gives James back a bit of faith. More importantly, James finds he can care for something other than himself. He says, wonderingly, that it’s a bit like being a parent—and understands for the first time how his parents must have felt when he disappeared into street life.

Bowen does go a bit more into the process that produced the book, including a briefing on how to handle interviews with the media.  It also explains that, contrary to reader assumptions,the book didn't make James immediately wealthy.

Note:  The library also owns a copy of My Name is Bob, a picture book version which imagines what life was like for Bob before he met James.  There is a third book planned for this fall, entitled A Gift From Bob:  How a Street Cat Helped One Man Learn the Meaning of Christmas.

James and Bob have a very active Facebook page at https://www.facebook.com/StreetCatBob. It’s a great way to keep up with their adventures.
Posted by BPL Ref at 5:34 PM