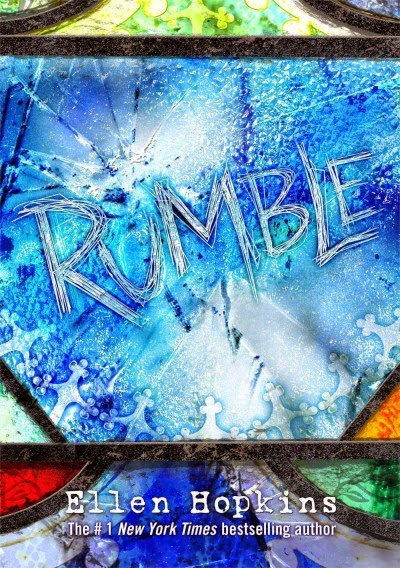 I am addicted to Ellen Hopkins’ books. For those of you who have never read anything by Ellen Hopkins, you should be warned that her novels are controversial. Her first Young Adult book Crank is about her daughter’s drug addiction to meth. She also writes about teenage prostitution, suicide, bullying, and other divisive subjects. Needless to say, schools and parents have tried to ban her books from coming in contact with a student or child. I am enthralled by her decision to write about these topics that some authors wouldn’t dare to touch with a ten foot pole, so I looked forward to reading her newest novel Rumble. The characters were believable; the plot was tense. So why did I feel so disappointed?

In Rumble, I was introduced to Matthew (he prefers “Matt”) who is head over heels for a pretty blonde girl, but then again what teenage boy isn’t? Her name is Hayden and although she is his girlfriend, he feels that she is becoming a stranger to him. On top of worrying about his relationship, Matt is also dealing with the loss of his brother who killed himself after being bullied because he was homosexual. Matt seeks comfort from Hayden but is disappointed to find out that she would rather spend time with her “church going” friends, who he feels judge him and come in between his relationship with Hayden. Matt is an atheist who believes that death ends everything. Throughout Rumble, he is trying to deal with forgiving those he feels played a part in his brother’s death as well as forgiving himself. He also begins to question some of his own beliefs.

As I mentioned before, the characters are believable. They deal with typical teenage problems such as bullying and relationship problems. The characters met my standards for what I expect from an Ellen Hopkins book. I also found myself unable to put down the book. It is around 550 pages and I read it in three days. Of course, Ellen Hopkins writes her stories using poetry, so the book is probably really half the size. (There goes my bragging right.) I guess I was most disappointed with the climax of the story. When Matt is finally having that “coming-of-age” moment, the story feels rushed. I wanted to know more about Matt’s relationships with his parents and his girlfriend. Then again, Hopkins is known for writing sequels, so perhaps in a few years my questions will be answered.

As far as Matt’s acceptance, or lack of acceptance, towards the unknown after death, well, I feel that part was realistic and easy to appreciate. I had empathy for Matt and I am a sucker for a guy with a broken heart. As far as Hayden goes, I wanted her to get hit by a bus. (I am NOT a sucker for a conniving back stabber.) I would recommend this book to lovers of Young Adult books and/or readers who like to read about the true encounters that a teenager may face. While Rumble wasn’t my favorite Ellen Hopkins book, it isn’t the worst YA book (or adult book, for that matter!) I have read.

If you’re intrigued by Hopkins, I highly recommend Identical and Burned.
Posted by BPL Ref at 12:15 PM