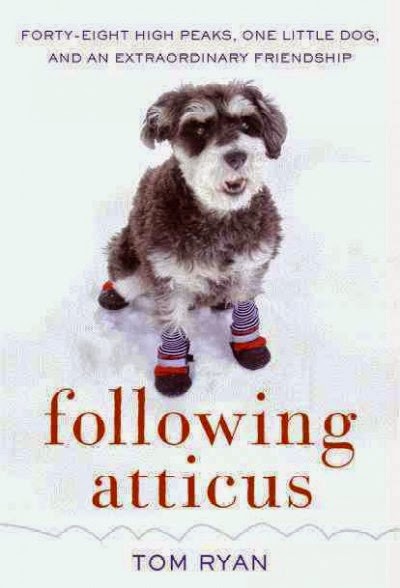 When Tom Ryan learns that his friend is diagnosed with cancer, he is devastated. They had been friends for years and he can’t believe that her life is going to come to a premature end. After his friend passes, Tom wants to do something in her memory. He decides he and Atticus will hike New Hampshire’s 48 mountains twice in one winter to raise money and awareness for cancer.

At this point, you need to understand that Tom is an overweight, middle-aged journalist and owner of a local newspaper called The Undertoad, and that Atticus is a 20 pound schnauzer. In other words, these two wouldn’t be anyone’s idea of typical mountain climbers or hikers.

When the people of the town learn of his plan, they love the idea and ask Tom if he will dedicate each hike in name of a person who died from cancer. His personal quest becomes a community effort.

Now, Tom and Atticus are certainly not new to hiking, but hiking 48 mountains twice in one winter is certainly a challenge! But Tom looks forward to the fundraiser because he believes so much good will come from it. He also knows how much Atticus loves the mountains. (Tom often refers to Atticus as “Little Buddha” because Atticus seems to “reflect” during their endeavors in nature.)

His father is another factor in Tom’s decision. Tom doesn’t have a close relationship with his father. In fact, there are many years of silence and anger between them.  Tom knows that one of his father’s regrets is that he didn’t climb mountains himself before illness took control of his life.  Tom hopes that, by sharing his adventures with his father via an article in The Undertoad, there will be some sort of reconciliation.

Following Atticus is one of my favorite animal stories because even though there are parts that tug at the ol’ heartstrings, the ending will not disappoint. Readers will follow Tom’s and Atticus’ journey of loss and grief but, most of all, happiness. You can still follow Tom and Atticus online!

Tom often posts pictures of Atticus and gives a brief description of where their next journey will be. I would recommend this book to animal lovers and nature lovers. Not only will you fall in love with Atticus, but you’ll feel inspired by the glories of nature. In fact, after reading Following Atticus, you may yearn to go on your own adventure!

Comet’s Tale: How the Dog I Rescued Saved My Life by Steven Wolf
Wallace: The Underdog Who Conquered a Sport, Saved a Marriage, and Championed Pit Bulls—One Flying Disk at a Time by Jim Gorant
Katie Up and Down the Hall by Glenn Plaskin
Homer’s Odyssey: A Fearless Feline Tale, or How I learned About Love and Life with a Blind Cat by Gwen Cooper
Dewey: The Small Town Library Cat Who Touched the World by Vicki Myron
Cleo- How an Uppity Cat Helped Heal a Family by Helen Brown
A Lion Called Christian: The True Story of the Remarkable Bond between Two Friends and a Lion by Anthony Bourke

(Note:  Meygan has just joined the staff and has volunteered to do reviews, so look for more of her work here!)
Posted by BPL Ref at 10:33 AM