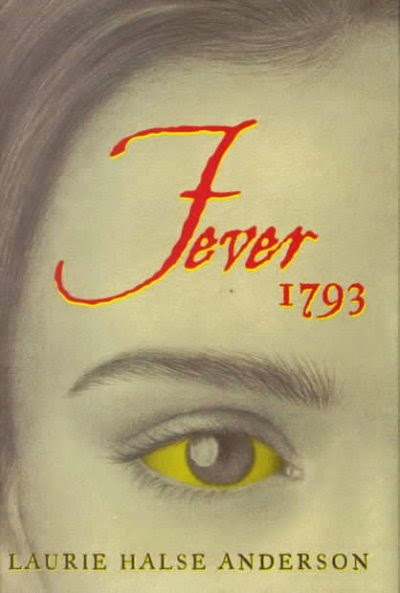 Today the headlines warn of the Ebola epidemic in Africa.  Towns are being quarantined. People are in a panic.  This has happened numerous times across human history:  just the names of the diseases change.  Smallpox, tuberculosis, Spanish influenza—the list goes on and on.  Another thing that doesn’t change is that when the danger has passed, people quickly forget.  How many folks now realize that just a few decades ago communities were closing swimming pools because of the fear of polio?

That’s the way it was with Yellow Fever too.  It spread quickly and claimed thousands of American lives within months.  I admit I hadn’t thought much about Yellow Fever until I came across Fever 1793 by Laurie Halse Anderson. The cover is intriguing, yet chilling, and depicts a young girl with yellow eyes. The image is certainly haunting. I found myself picking the book up, a clear case of judging a book by its cover.

Fever 1793 is a young adult historical fiction piece that places us in the world of Mattie Cook, a fourteen year old girl who lives in Philadelphia with her mother, grandfather, and a cook named Eliza. Mattie’s mom, a restaurant owner and a “proper lady”, is ready for Mattie to follow in her footsteps, insisting that she drink tea with girls her age and hopefully find romance with a man that is “worthy”. But Mattie has no interest in making new friends or falling in love—she is too busy spending time with her best friend, Polly, and Grandfather.

There’s a rumor in town that a fever has broken loose and is spreading rapidly. Even though Mattie’s mother warns her repeatedly, Mattie doesn’t realize the seriousness of the fever until the fever takes Polly’s life. Mattie cannot believe that someone as young and robust as Polly could die from a fever. As if things couldn’t get worse, Mattie’s mother catches Yellow Fever and she cajoles Mattie into leaving town with her grandfather. Mattie and her grandfather are offered a ride via horse and wagon, but are left in the middle of nowhere when Grandfather’s cough leads the driver to suspect that he has the fever. Mattie and her grandfather have no choice but to walk. While walking, it’s Mattie and not her grandfather who becomes ill and passes out.

By this time I could not put the book down. Even though Mattie is a fictional character, I couldn’t help but feel for her as if she were a real person.  Anderson did a wonderful job with character development while exposing readers to a frightening time in American history.  I felt as if I were living in those times, because Anderson did such a good job of describing the time and places.  Besides Mattie, there were a number of important characters she brought to life, including one based on Dr. Benjamin Rush.  Rush was an actual doctor at the time and was well known for trying to “bleed out” the fever in his patients.  Needless to say, the results weren’t often what he anticipated.

By the end of the novel, Mattie has changed. She has witnessed grief, loss, and despair, causing Mattie to become an adult before she wanted to. One of my favorite parts about Fever 1793 is the way the author blends facts with fiction, letting readers learn a lot about Yellow Fever; not just what caused it, but how it affected society.

Even though this is a young adult book, I would recommend it to anyone who loves history and a good story.
Posted by BPL Ref at 10:19 AM