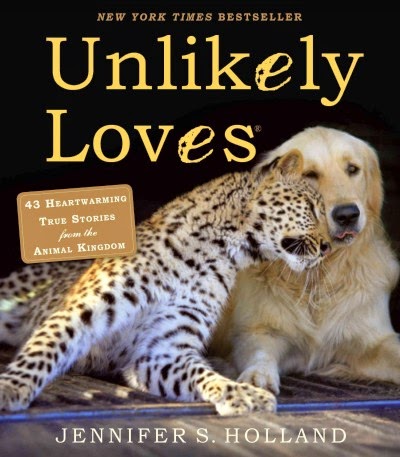 With all the sweet and funny animal pictures and stories floating around the internet these days, do we really need a book on the same subject?  Yes, of course we do.  In my family we need all the adorable cat (and maybe dog) pictures we can possibly “awwww” over.

Following on the heels of the New York Times bestseller Unlikely Friendships about inter-species connections, Unlikely Loves shows many other best friends in the animal kingdom.  Some of these pairs look like they would be posing for selfies, if they only had opposable thumbs.

Zoe the dalmatian became extremely fond of a black and white spotted lamb named Lambie.  Indeed, this pair looks like they could really be related.  Spots everywhere!

Sasha the Rottweiler already had eight puppies when her humans brought home a piglet named Apple Sauce who had been rejected by her mother.  Sasha’s motherly instincts kicked in and joined the canine litter as just another one of the kids.  The puppy-pig pictures might just make you “squeal”.

My favorite stories in this book are the ones where an animal takes an orphan or orphans of another species, and cares for the young ones.  When a young woman heard that a litter of one week old kittens needed to be adopted and bottle fed, she brought them home.  Almost immediately, her dog Sydney began to care for the kittens.  Sydney’s hormones even went into overdrive and she began lactating to feed the kittens.

If this has tickled your fancy, be sure to pick up Unlikely Loves at the Main library, or Unlikely Friendships from the Avoca branch.  These are books full of sweet stories that are easy to flip through and enjoy.  As Jeanne said, “I went through and read all the cat ones.  I have my priorities.”