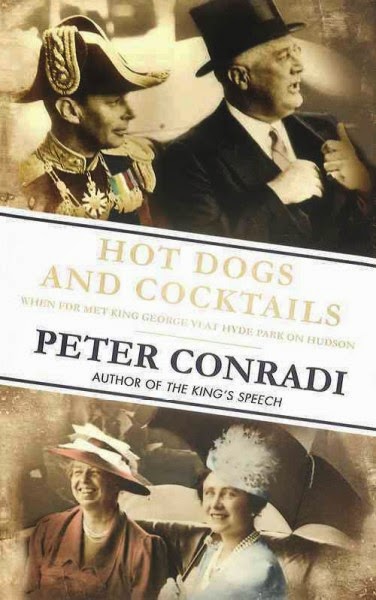 The month was June, the year 1939.  The news media had announced that George VI, king of Great Britain, and Queen Elizabeth would be touring their royal province of Canada.  This encouraged President Franklin D. Roosevelt to send a friendly invitation to the royal couple to include the United States in their itinerary.

They responded eagerly, and for a few days that summer Franklin and George, two heads of state, enjoyed each other’s company both in Washington, D.C., and at the Roosevelt estate of Hyde Park on the Hudson.  The American press and the news reels producers were beside themselves to film and describe every little detail in the meetings that transpired.  That was the social event of the year!  But were those meetings just matters of folksy chit-chat?  Before you answer, remember that within two months World War II had engulfed Europe.  Did Roosevelt and the king share more serious concerns?

And this becomes the theme of Hot Dogs and Cocktails, a recent book which reveals the real reasons why the royal couple came to Canada and the United States and what were the private discussions never reported in the newspapers.  All of this Peter Conradi, the author, describes in a relaxed and easy-to-read style.  A Brit, he is also the author of The King’s Speech, the well known book which recounts the efforts of George to overcome a stuttering problem.  Conradi begins with a full accounting of both Roosevelt and George, their personal backgrounds and their capabilities as well as inherent faults.  He recounts in an engaging and humorous style all the myriad details that had to be worked out to entertain the first British monarch to visit America, a blend of the serious and the comic.  The book’s title comes from FDR’s insistent that his visiting royals must eat the great American food delicacy, the hot dog – which they did using only their hands.

On the serious side, the British sought assurances from Roosevelt that America might enter the war against Hitler, but FDR, fully aware of the powerful sentiments for isolationism that prevailed throughout the country, could only promise that he would seek to have America send material aid to Britain in the coming conflict.  While the discussions that June failed to reach a firm promise as to the extent of American help, it did mark the beginning of a growing friendship between the two nations, and it would be not too many Junes in the future until American and British soldiers would fight together in their efforts to storm the German held beaches at Normandy.  You’ll find this a very engaging book, easy to read, and filled with interesting stories that give it a sparkle.

(There was an earlier review of this book by Jeanne, but this is an excellent review with a different perspective.)
Posted by BPL Ref at 8:49 AM