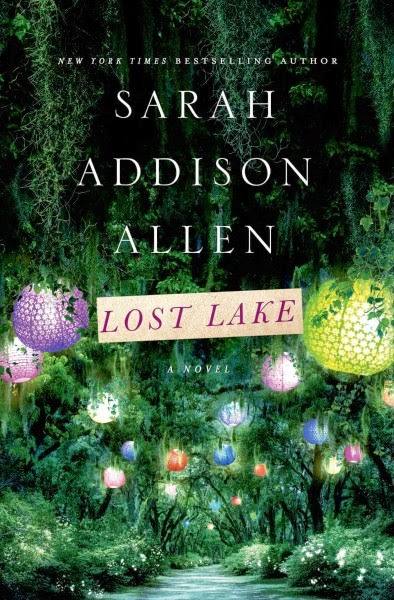 It’s been a year since Kate’s husband Matthew died suddenly, leaving a bewildered Kate unable to cope with everyday life.  Her mother-in-law, Cricket, has filled the void by making all the necessary decisions—and now, that includes selling Kate’s house and having Kate and granddaughter Devin move in with her.  Maybe it’s the boxes, maybe it’s Devin’s unhappiness, maybe it’s just one set of orders too many from Cricket, but all at once Kate feels the need to do something impulsive.  She remembers an idyllic summer at an old resort run by her Aunt Eby called Lost Lake, so off they go to Suley, Georgia.  Once there, they discover the resort is a shadow of its former self: the cabins desperately need repair, the roster of guests dwindling, and a developer is trying to buy the land. Will this be the last summer for Lost Lake?

As is usual with Allen’s work, the plots are less important than the people and the ambiance.  Her locations are these wonderful southeastern Never-Never Lands, where the peculiar is the norm, the food is succulent and buttery, where love dares all odds to make it to a happy-ever-after ending, and the characters are all slightly off-kilter and gently odd. There’s Lisette, the mute French chef who knows that words have a terrible power; Jack, the shy suitor who has adored Lisette for years but is too afraid to speak up; Bulahdeen, the elderly woman who takes joy in living and Bulahdeen’s friend, Selma, a ferocious husband-hunter; and Wes, who fell in love with Kate when they were children. There’s always a character or two whom I find particularly memorable.  In this case, it’s Selma, the unlikeable divorcee, who goes through husbands like tissue paper. She’s had seven of them, and now she’s looking for number eight.  At the end, she doesn’t change and is as prickly and defensive as ever, but we can accept her just as Bulahdeen does.  That’s another thing I enjoy about these books: for the most part, the unlovable characters don’t suddenly change to sweetness and light.  They remain true to themselves:  we just understand them a bit better.

And then there’s the alligator.

Or maybe there isn’t.  Everyone says there are no alligators in this part of Georgia.  Kate thought she saw an alligator and nearly ran off the road on the way in, but she hasn’t seen it since.  Devin does, though.  What’s more, the alligator talks to Devin.  He has a secret treasure he wants to share with her.

Unless, of course, there is no alligator.

That’s the heart of a Sarah Addison Allen novel.  If you’re not willing to suspend some disbelief, if you’re not going to go along with the flow, then you’re not going to enjoy this book. Also, if you like involved plots, you probably won’t enjoy this book.  SAA books are like a little slice of a childhood summer, languid and dreamy, where the most improbable things are entirely possible.  They’re a sultry summer evening with cool glasses of ice tea with fresh mint and the best banana pudding you’ve had since you last ate it at your grandmother’s, with the lightning bugs flashing, a shooting star to wish on,  and the occasional mosquito just to keep you on your toes.

And yes, I believe in the alligator.
Posted by BPL Ref at 8:46 AM