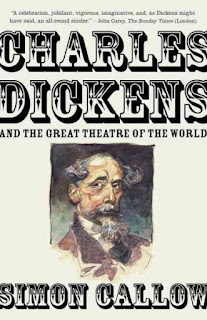 2012 is the bicentennial of Charles Dickens’ birth, so it’s no surprise that there have been a number of new books out about the great author. Jud has been quite taken by the era because it was a world in which books made a difference and authors were put on pedestals. Dickens’ celebrity was incredible. The World of Charles Dickens by Martin Fido helps us understand a bit more about just the sort of world it was, with the tremendous gaps between the rich and poor. Simon Callow’s book Charles Dickens and the Great Theatre of the World emphasizes how much theatre influenced Dickens, who also gave dramatic readings of his own works. He could see how a book would “play” to an audience. The book itself is conversationally written and focuses on the idea of authors as performers.

Red Ink: Inside the High Stakes Politics of the Federal Budget was called a “must read” for every person planning to vote in the upcoming election. Author David Wessel tries to explain exactly where the money comes from and where it goes, and he does say in a way that the general public can understand. It’s a complex subject, no matter what the sound bites indicate.

While in Tibet, geologist David Montgomery heard a story about a great flood rather like the Biblical description of Noah’s flood. He decided to examine the historic record, both that written by humans and the geologic record. Rocks Don’t Lie chronicles his search and conclusions, while explaining the history of the field of geology and how approaches to science have changed. It’s a wide-ranging book which even manages to work in mentions of libraries and Agatha Christie. (Her husband was an archaeologist.) It’s written for popular audiences.

Last but not least, This Republic of Suffering by Drew Gilpin Faust examines the effect that the loss of so many lives in the Civil War had on the nation as a whole. Letters written or dictated by wounded or dying men would assure their loved ones that they were with friends, at peace, and had done their duty. Entire industries grew up around the need for people to commemorate their lost loved ones. Publishers Weekly called it “an insightful, often moving portrait of a people torn by grief.”