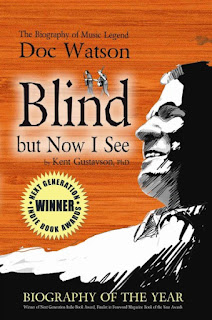 
I grew up listening to Peter, Paul, and Mary, Joan Baez, and The Brothers Four with the occasional Kingston Trio song thrown in for good measure. My mother liked many kinds of music from Big Band to pop, but she had a soft spot for the folkies because she grew up hearing the traditional ballads sung. She taught me her versions of a few, despite my near-total lack of musicality. I favored pop and rock, shunning that dreadful bluegrass stuff and whiny country. (When you grow up in the country, you want to be seen as sophisticated and edgy. Rural areas often have an unspoken rule of sorts: if it’s local, it can’t be good. So when Ralph Stanley’s festival took place about five miles away over the mountains but acoustically sounded as if it was in my front yard, I went inside and shut the windows.)


As the years went by and what I knew as rock started turning up on radio stations as easy listening and then country, I began to re-evaluate what kind of music I liked. It turned out that I did like some of that bluegrass stuff when it wasn’t being sung in a falsetto voice, and I did like some country. I paid to hear Ralph Stanley sing and laughed to think I’d ever disdained listening. I rediscovered old artists and found new ones.

Among those “new to me” artists was Doc Watson who actually had been around for decades. I was fascinated by the way he fused traditional music with more contemporary sounds without sacrificing the integrity of the original. I began to accumulate cds and read several articles about Doc. I listened to “Legacies” with David Holt, a cd in which songs were interspersed with stories of Doc’s life.

Then I learned there was a biography about Doc. At first I was delighted, but then I began to have my doubts. Blind But Now I See: The Biography of Music Legend Doc Watson by Kent Gustavson is long on interviews with people around Doc but short on personal interaction with the man himself or close family members. I began to wonder if this was something I wanted to read. Sometimes it’s a difficult decision for a fan whether or not to read a biography not authorized by the subject. Some authorized biographies only present what the subject wants known and will cast events in the most favorable light possible; on the other hand, some unauthorized tomes are more concerned with presenting (or perhaps even manufacturing) controversies in order to sell more copies than in presenting an honest portrayal. I decided to read the author’s introduction. Gustavson wrote, “Doc doesn’t want to be put on a pedestal, and this book, though reverent, aims to fulfill his wish.”

I decided to hope he was sincere with that “reverent” and started reading. He interviewed many of Doc’s friends, acquaintances and especially fellow musicians; he quotes well known personalities such as Jean Ritchie, Marty Stuart, and Ricky Skaggs, but also gives non-famous people a chance to express their views. For family stories and quotations from Doc, he relied on numerous published interviews, all of which he notes by chapter. The writing is smooth, easily integrating the stories and using direct quotes when possible.
The book seems thorough and thoughtful; it begins with the courtship of Doc’s parents, which is an absolutely wonderful story. I can imagine it being told and retold among the family. The book continues through Doc’s childhood, marriage and career. The sections on Doc’s childhood were fascinating and much more detailed than what I’d read before, as were the chapters on his early career years. The most tragic incident and the one that I suspect caused consternation as far as the book was concerned, was the death of Doc’s son, Merle. I’d read a couple of accounts, and had noticed that some of the details were a bit different. Gustavson recounts different versions and offers some theories. To my mind, he didn’t sensationalize, but with any loss such as this those most concerned are more sensitive to nuances. Merle’s death was devastating and had an enormous impact, not the least of which is the annual festival in his memory, Merlefest.
Gustavson, a professor and musician, writes with sensitivity and compassion, without being condescending or fawning. Not everything in the book is positive but the negatives are mild and certainly understandable. I felt the book was honest but respectful, and that Gustavson’s admiration for Watson shone through. For me, the test is how it affected me as a reader, and I can truthfully say that after the book I had a much better sense of how Doc had overcome all obstacles, controlled his own destiny, and become an absolute giant in the field of traditional music. He struggled to be gracious while trying to maintain some semblance of a normal life, when traveling musicians would just “drop by” and then spend days or weeks with the family, stretching their resources to the breaking point.

I began the book admiring Doc Watson. I finished it with a feeling of awe.