Joy of Drinking by Barbara Holland 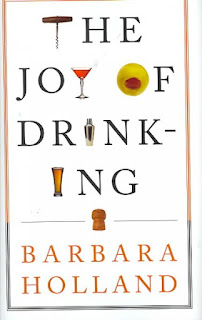 
In her book, The Joy of Drinking, author Barbara Holland traces the history of fermentation from its earliest beginnings to the present. She relates the manner in which people in various parts of the world discovered that if they allowed certain organic substances to ferment, and then drank the liquid that was produced, it made them forget their troubles for a while.

According to Ms. Holland, ancient people were motivated to stop roaming and cluster together in tribes so that they could grow crops for fermentation. Apparently it was more fun to ferment things and dance around together than it was to throw rocks at other families and forage for tidbits.

Apples, peaches, cashews, sugarcane, barley, rice, berries, honey, grapes, potatoes, milk, cactus, coconuts - there is a long list of organic substances that can be fermented, and mankind seems to have tried them all.

The milk mentioned in the previous sentence is mare’s milk (yes, as in horses) fermented by nomadic Mongolians in Central Asia into a beverage called airag. Fermentation was achieved by sewing the mare’s milk up tightly in a horsehide and beating it or tying it to a trotting horse. In modern times airag is made in vats which are stirred frequently by jolly family members and friends.

Marco Polo tried this beverage and maintained that it possessed “the quality and flavor of white wine;” however, a more recent traveler reported that it tasted like “warm sake filtered through a dirty horsehair sock.” I think maybe I don’t need to know the real truth on this one, and will not be traveling to Mongolia to find out.

The author, a resident of Virginia's Blue Ridge Mountains, leads us through the evolution of brews and the settings for consuming them, with descriptions of taverns, pubs, speakeasies, home beer brewing, Chinese rituals centered on the drinking of wine, Greek dinner parties and feudal mead halls.

Ms. Holland's musings on taverns and public houses in England made me sad that we live in a time in which many of us are so engrossed in our use of electronic devices that we barely need to look at one another, much less go to the tavern and get to know the neighbors. But, way back in the way back when that’s what people did. After a day of labor they flocked to the neighborhood tavern or pub to enjoy good companionship and beverages. Ms. Holland speculates that it was the need for companionship, rather than the desire for drink, that drove these individuals out into the night and across the empty countryside since they brewed beer at home and probably had plenty of it there.

We learn about the consumption of beer soup for breakfast in Germany; beer soup was the standard breakfast for German families until the end of the eighteenth century. I include here a summation of the beer soup recipe in case you want to try it at home. What a great way to fortify yourself before a taxing day. Say you have a job interview, or a court case; have double portions so you’ll be especially smart and strong, as well as relaxed.

Beat two eggs in a saucepan. Warm some beer in a separate sauce pan, adding a chunk of butter to the beer. Then pour cold beer into the warm beer to cool the warm beer (?) and add a small amount of salt. Next pour the beer mixture into the eggs and whisk again. Then pour that mess over bread or rolls or whatever starchy thing you have. The recipe states that you should use “a roll, white bread, or other good bread.”  I question the “good bread” part. Considering what you’re pouring over the bread, I don’t see how it could possibly matter whether or not the bread is good. At the final stage the whole affair can be sweetened with sugar to taste. Maybe the addition of the sugar is what pulls it into focus.

There is a chapter in the book, appropriately titled “The Following Day,” that covers various hangover cures, and also explains how the body metabolizes alcohol. Most of the hangover cures sounded pretty wicked to me. I offer one now, for your perusal. It was the favorite hangover cure of the English novelist, Evelyn Waugh. “Take a large lump of sugar, soak in Angostura (bitters) and roll in cayenne pepper, then drop into a generous glass and fill with champagne.”

I believe I would die if anyone ever made me drink this concoction.

I am sure most of us are familiar with the theory of hangover cure that involves “hair of the dog that bit you,” meaning, of course, “drink some more booze.” The National Insistutes of Health refer to this as re-administration, and do not recommend it. The next time you drink a bloody mary on the morning after, remember: you’re not just throwing down some more booze. You’re re-administrating!

Two handy appendices follow the text. Appendix A gives a few recipes for fruit wine, and Appendix B offers rudimentary instructions on how to build a still, just in case you want to make the stuff for yourself.