Radioactive: Marie & Pierre Curie: A Tale of Love and Fallout 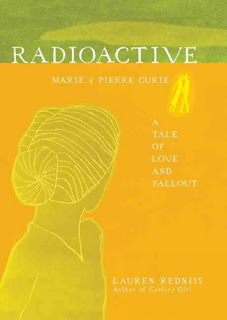 Pierre and Marie Curie are names that it is easy to see without any association to human beings. They bring back memories of grade school science classes and quizzes I'm sure I flunked. Then later, as a student in France, they became names I associated with streets or the occasional school. It was all dry, boring history having something to do with science that I didn't understand.

It was on this trip to France where my kneejerk reaction to their names started to change. I started to notice something: "Marie." The streets weren't just named after a faceless, white, male scientist from a hundred years ago. This was a couple, and that couple included a woman at a time when women were not particularly welcome in science. Curiosity overtook me, and I started to read more about the Curies.

When I first heard of Lauren Redniss's graphic novel Radioactive: Marie & Pierre Curie: A Tale of Love and Fallout, I wasn't sure how I felt about their lives presented as a love story. I suppose they were still a little dry and serious to me, so I put off reading it. Then I found it at my library on a day when I was willing to give it a try, and I'm glad I did.

This is a dense graphic novel. You won't find word balloons here. Redniss's art is sparse, but it conveys incredible emotion. Since Pierre's life was much shorter, this is ultimately a novel about Marie, and the story goes on well after Pierre's untimely, heartbreaking death. The pages portraying his death and Marie's life immediately afterward are brutally effective and reduced this jaded reader to tears. This episode is followed by a large photo of Marie at the front of a class full of disturbingly identical male students. She was given Pierre's teaching load at the Sorbonne after his death, thus making her the first woman to teach there. The only text on the page with this photo is Marie's reaction: that someone was stupid enough to congratulate her.

Even after the love promised in the title has ended, the story goes on and becomes even more fascinating. Pierre was not the end of Marie's romantic life. Some time later, Marie began a relationship with one of Pierre's younger, married students. This resulted in a huge scandal and nearly caused the Nobel Prize committee to bar her from accepting her award, but, of all people, Albert Einstein came to her defense and encouraged her to accept anyway. The rest is history (although very interesting history that you will learn if you read this book!).

Redniss's art mixes photo collages and print materials to show not only the Curies' life stories but the consequences of their work that we still live with today. Stories of the "Radium Girls," the Manhattan Project, and other radioactive tales interweave with Marie's own life as the discovery that made her famous slowly eats away at her health and that of her daughter Irene, who also followed in Marie's steps as a scientist.

Radioactive is an amazing tale and a surprisingly long read for a graphic novel that will tug your heartstrings all the way through. While it is not a quick read, it is something you will be eager to get back to, and unless you are a student of science history, you may still be surprised at what comes next.
Posted by BPL Ref at 1:49 PM