Red on Red by Edward Conlon 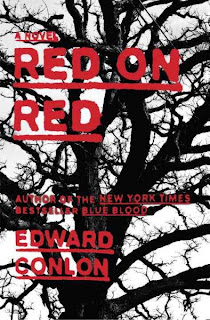 
I have never been a huge reader of crime novels, but when I read a promising review of Red On Red by Edward Conlon I thought it sounded interesting. I put it on hold for myself and waited.


Apparently the review I read was printed before the book was published, so the wait was a little long.
After a time, I could no longer remember what this book I had on hold was about, and I wasn't sure what had caused me to want to read it. I would look in my library record, see the title, and idly wonder. As time passed, I felt only the mildest curiosity about it. Then the day finally arrived. I checked the book out, and was almost dismayed to see it was a crime novel. Blood, gore, autopsies, hopelessly mean people... these are not really my cup of tea. Nonetheless, I decided to give it a shot (no pun intended).


I read the first page and was hooked. The story kicks off with a body hanging in a tree in a park, a presumed suicide. On the second page Conlon introduces detectives Meehan and Esposito who work as partners. On the third page the passerby who called the police after discovering the body starts to seem fishy and suspect. So, was it a suicide, or something more sinister?


You get my drift. This book moves along. It contains multiple story lines that are at times confusing, but I suppose that exemplifies how confusing it must be to be an NYPD Detective.


Although he is not officially aware of it, the Internal Affairs Bureau is investigating Esposito, who has a tendency to bend the rules, and Meehan has been recruited by Internal Affairs to spy on Esposito. Esposito, of course, is not aware of his partner's role as a spy. As the story unfolds, this situation is seriously complicated by the fact that Esposito and Meehan become close friends. Meehan was uncomfortable from the start in the role of snitch, but this role becomes unbearable to him as he and Esposito develop a real bond.


Other plot lines involve a serial rapist who is terrorizing the city, a gang war, and Grace, a troubled school girl who will break your heart. On a more personal level, there is the break-up of Meehan's marriage.


All of these people and plot lines make for a gripping story. Adding to the appeal of the book is the fact that the author, a Harvard graduate, is a NYPD Detective. As an author he is doing more than just imagining a routine day in a detective's life. He lives those routine days so he really knows how to fictionalize them. As I read I felt that I was getting a true picture of what life is like for a Real-Life Big City Detective, and, Gee! Am I ever glad I am not one.
Posted by BPL Ref at 10:15 AM