Pampered to Death by Laura Levine 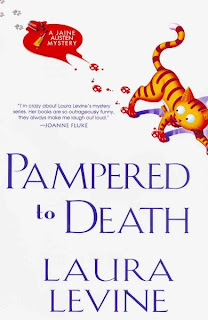 Reviewed by Jeanne
When I first picked up this book, I was just a tad confused.  Granted, that isn’t an unusual state for me, but I couldn’t understand why a Jane Austen mystery would have an orange cartoon cat leaving skull shaped tracks in red nail polish. Then I looked again and realized this wasn’t the historical mystery series with Jane Austen as a sleuth written by Stephanie Barron, but a contemporary mystery with a heroine who spells her name “Jaine.”  It had a cat on the cover so I decided to give it a try.
Jaine is another one of those amateur sleuths who just seems to stumble into a murder everywhere she goes.  This time she’s headed to a spa courtesy of a friend whom she saved from a lengthy stay in the slammer when she proved he wasn’t a murderer.  She has her cat Prozac in tow—in a carrier, actually; Jaine would have preferred having the very vocal feline in a separate trailer, but one must make do.  Besides, Prozac should calm down once they’re both settled in what should be a luxurious suite, lounging the day away while nibbling on delicacies and having their every whim being catered to.
Sadly, it’s not that kind of spa.  It’s a health spa. Guests are supposed to consume no more than 900 calories a day; given that meals seem to be color coordinated in shades of gray, even eating that much would be a bit of a stretch. Naturally lounging is frowned up; healthy workouts are the order of the day.  The only exercise Jaine would be interested in would be a hike down to the local pizza parlor.  Olga and her staff are more attuned to denying creature comforts that supplying them—well, except for Delphine the maid.  She’s quite willing to provide some more nearly edible food. . . for a price.  A hefty price.  Fortunately, she takes checks.
The other guests are a self-centered actress and her entourage, her buff and equally self –centered former co-star, and a star-struck grocery checkout clerk who has apparently made it a point to keep up to date on all the tabloid gossip.  Even worse, they all seem to think exercise and food deprivation is only to be expected.  Obviously, these are not Jaine’s kind of people!
Before Jaine can decide to grab Prozac and make a break for it, one of the guests ends up dead—and not just from the awful food.  The only way to escape is to identify the murderer, so Jaine sets about her sleuthing.  Prozac the cat is a diva who knows what she wants, and is one of my favorite characters.  A sub-plot has emails from Jaine’s parents and the neighborhood association; suffice it to say garden gnomes are involved. Light-hearted, funny and in some cases downright zany, Pampered to Death is a good choice for times when you need a good giggle.
Posted by BPL Ref at 12:57 PM