The Lantern Men by Elly Griffiths 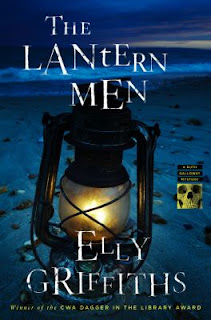 Once again, it is our pleasure to welcome guest reviewer Kevin Tipple the the BPL Bookblog.  For more reviews, news about books, and information for authors, check out Kevin's Corner.

It is the middle of May 2018 as The Lantern Men: A Ruth Galloway Mystery by Elly Griffiths begins and a lot has changed in recent months. Kate is now nine. Dr. Ruth Galloway now teaches at Cambridge and lives with Frank. She is no longer the North Norfolk police’s resident forensic archeologist and is far from her beloved cottage on the Saltmarsh. While she will always have a connection to DCI Henry Nelson because of Kate, she is trying her best to close that door of her life and move forward with Frank and her new job duties.

That is until convicted murderer Ivor March offers a deal that Nelson cannot refuse. Finally convicted of two murders, Ivor Martin, remains a suspect as far as DCI Nelson is concerned for the cases of Nicole Ferris and Jenny McGuire. They are the same body type as the other victims, both lived in the Norfolk area at the time as did his confirmed victims, and both had contact with March by way of his classes as did the confirmed victims. Nelson is sure, without a shred of doubt, March did it.  He knows March did it. Proving it is the problem as there has been no sign of the bodies or any evidence in either case.

That is until Ivor March decides to cooperate and will do so for a price. Not only does he want a meeting with Nelson and Dr. Ruth Galloway, he will only tell them where the bodies are if she handles the dig herself. Clearly March is working an unknown agenda, but if it means promising to do the excavations will bring the deceased home to their loved ones, Dr. Galloway is willing to agree to the meeting and to supervise the recovery of the bodies.

She does and in addition to the bodies unearths a tangled web of lies and deceit, motives, and strange relationships going back decades. Local legends and modern-day murders make The Lantern Men: A Ruth Galloway Mystery by Elly Griffiths a compelling read.

Multiple storylines in addition to the one noted above are at work in this complicated read. This is a series that should be read in order and that is especially true here with numerous references to earlier events in the series, the changing nature of relationships, and the passage of time. There are frequent references to the fact that is has been 10 years since the first book, The Crossing Places, and how things have changed for Dr. Galloway, DCI Nelson, and many of the secondary characters who have overtime, had major roles in the series. The reader is left with the sense this is a turning point book where things will reset going forward in the series.

A complicated and engrossing book, The Lantern Men: A Ruth Galloway Mystery by Elly Griffiths is strongly recommended, as is the series.

My reading copy came from the Skyline Branch of the Dallas Public Library System.