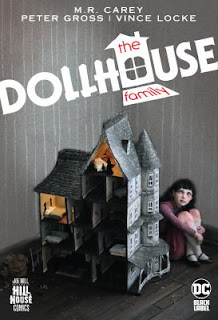 
Horror author Joe Hill has teamed up with DC Comics to curate five limited series horror comics under the banner Hill House Comics. I was able to read four of them so let’s dig in!

In the 1890s, a young woman struggles with the death of her father, and her mother’s new found interest in spiritualism. While she tries to convince her mother that the medium she visits is a fraud, Daphne is contending with her own terrifying spirit. One that lives within her.

Of the four, this was probably my least favorite. The story was fine, and the setting was appropriately creepy but it really didn’t do much more for me other than that. I know I’m no artist myself, but I can’t say I was a fan of the art style. The otherworldly creations were fine but when it came to humans, the artwork was sloppy and, to be honest, just unpleasant to look at.

Two teenage girls wake up in a movie theater with no memory of the previous few hours. Though strange things seem to happen regularly in Shudder-to-Think, Pennsylvania, the girls are ill at ease and struggle to remember. The town itself is a dying coal town with fires endlessly burning beneath it. For years, the women of the town seem to have memory problems though no one can say why.

This was an eerie entry and full of body horror: sinkholes appear in women’s torsos, and Skinless Men roam the woods. It reminded me a little of Paper Girls. Not necessarily the plot but the tone, and just the strangeness of it all. I loved the girls’ friendship, and the artwork was appropriately bizarre. A solid read. 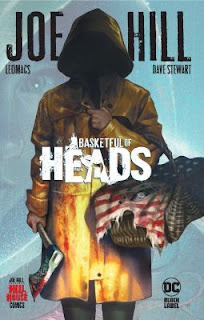 It’s the summer of 1983, and June is visiting her boyfriend, an auxiliary officer for a small town police department. When a quiet dinner with her boyfriend’s boss, the sheriff, is interrupted by a violent home invasion, June must take matters into her own hands. Snatching a Viking ax from the sheriff’s antique collection, June discovers that she can now decapitate a pursuer with a single swipe. I mean, yes, her victims continue to talk and be alert after they’ve been beheaded but June will just have to deal with that later. She has a boyfriend to save.

This one was a lot of fun, and my second favorite of the bunch. I loved June and her level-headedness. Would I be as calm if I was 1.) the victim of a home invasion, 2.) had to decapitate someone in self-defense, and 3.) had to deal with their talking, obnoxious heads after? Definitely not. But June, after an initial freak out, rolls with it. I have actually never read anything by Joe Hill before but this comic was really enjoyable, and I liked his wry sense of humor. The artwork was great too; realistic and surprisingly pretty.

Little Alice loves the antique dollhouse bequeathed to her by a distant aunt. She uses it as an escape from her abusive father; she is able to shrink down to doll size and play with the carefree doll children until it’s time to go back to the real world. Clearly, the dollhouse is no mere toy. But it is so much older and darker than Alice realizes.

This may have been the strangest entry but definitely my favorite. The story covers the history of the dollhouse and its owners throughout the ages. Misery seems to follow them, and Alice is no exception. We watch her as she grows from a child taken from her family into a troubled teen, and finally into a mother with a young child of her own. With its span of family generations, it feels like an epic. The back story of this house is truly bizarre but fascinating. I really liked the artwork as well. It’s straight forward but fantastical when it needs to be. There is also intermittent art used to break up the chapters where it looks as if real life dolls were posed in horrible scenarios. The artist for these, I believe, is Jessica Dalva, and they are wonderfully unsettling.

I have yet to read the fifth comic Plunge, about a lost ship that returns from the Arctic after forty years, but with the track record of these graphic novels, I will definitely check it out. Though I obviously liked some more than others, I think all of these are interesting and worth checking out to form your own opinion.

** I received copies of all of these from Netgalley in exchange for honest reviews. **