The Only Good Indians by Stephen Graham Jones 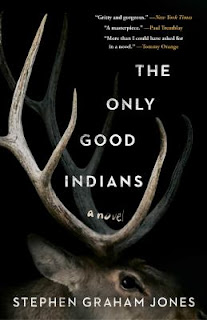 Native Americans use every part of the elk after a kill. When four young Blackfeet men stumble on a large herd of elk on lands forbidden to them, they seize the chance to take home such bountiful game. Unfortunately, they are interrupted by the game warden and unable to complete a proper kill. This youthful indiscretion will come back to haunt them in their later years.
On the surface, being haunted by an elk may not seem terribly scary but Stephen Graham Jones, who is Blackfeet Native American, makes it very unsettling. The story weaves between the men’s lives as they’ve gotten older and (mostly) settled down. The book opens with Lewis who is a postal worker and happily married. He begins having hallucinations of the elk he and his friends illegally killed, and he suspects she is back for revenge. He begins to not to be able to tell what’s real and what isn’t. He’s not even sure he can trust his wife. This section was the strongest part of the book for me. It’s baffling and ominous and a little gruesome. After we move on from Lewis’s point of view I had no idea where the story was going to go, which was exciting, but unfortunately the plot lost a lot of its steam. While there are still intriguing moments throughout the rest of the book, the pacing started to slow to the point that it became a struggle to read at times. However, I did enjoy Jones’ writing style. I’m not really sure how to describe it other than it felt more conversational.
Though it’s a little uneven, I can’t say I hated this book or even disliked it. It was different from anything I’ve read previously. Lewis’s section might be worth the read alone. If you think you can handle the pacing in the second half of the book, and you’re looking for a new kind of horror, The Only Good Indians might be worth checking out.
Posted by BPL Ref at 9:00 AM