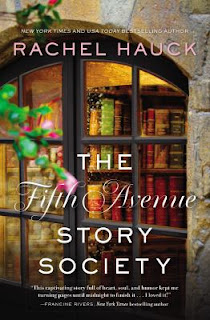 Five strangers receive an invitation to a meeting:  The Fifth Avenue Story Society.  The invitation is anonymous; the reasons they are selected unknown.  One is an heiress, head of a major cosmetics company who is known as “The Panicked Princess” for running out on her own wedding to a prince; one is an elderly widower who wants to write the great love story of his marriage; one is an Uber driver fighting for the right to see his kids.  Only two of the people have ever seen each other before:  Lexa, who serves as right hand woman to a young entrepreneur and who is the ex-wife of Jett, a professor and son of an adventurer.  Together they will try to solve the mystery of why they have been brought to this place and along the way reveal some of their deepest secrets.

I picked this up because it looked intriguing, and I had read some similar titles such as The Secret, Book & Scone Society by Ellery Adams.  Also they meet in a library! Definitely a plus.

But overall I was a bit underwhelmed.  Two of the characters had two very strong plot lines that held my interest; one actually had two, a secret and a moral dilemma. These were well done and interesting, redeeming the book.  The others. . . . not so much.  I had them figured out before the reveal and one I just didn’t buy as a huge secret.  More disappointment was had in the characters, who weren’t really well developed.  As readers we are told more than we are shown.  Naturally, there’s a romance or two along the way and again, there was one I didn’t buy because the author didn’t sell it.

As for the original invitations, that is never explicitly resolved but it is hinted that a higher power is at work.

I thought the book was okay but I’m not rushing out to find another. (At first I thought I might, when in reading the author’s note I saw that some of the peripheral characters appeared in another book but by the end I had lost interest.)  It’s a pleasant enough read and many people seem to have loved it, but it just didn’t tick enough boxes for me. Not every book will suit every reader!
Posted by BPL Ref at 10:54 AM