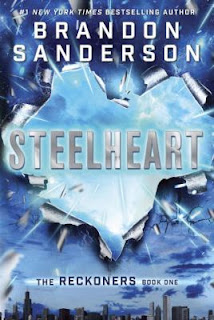 Ten years ago, when Calamity arrived in the night sky, ordinary people were given extraordinary powers—and they became Epics.  But with incredible gifts came incredible challenges and a desire to rule over humanity.

Now, in what was once Chicago, a powerful Epic named Steelheart has taken over and turned everything to solid steel.  Gifted with super strength, invulnerability, elemental powers, and an uncanny ability to turn whatever he touches into steel, Steelheart is a powerful Epic that no one and nothing can touch.  The Reckoners, however, are a group of ordinary humans who spend their days studying and assassinating Epics—and David, a young man who grew up in the steel-riddled world of Newcago, wants in.

I loved reading Steelheart by Brandon Sanderson.  It’s action-packed, it’s interesting, and it takes everything I know about superheroes/supervillains and completely turns it on its head.  Part science fiction, part fantasy, Steelheart is a wonderfully crafted dystopian world full of detail, depth, and intrigue.

It was also a lot of fun to read.

I was particularly fascinated by the main characters, specifically the Reckoners.  David, as the narrator, is incredibly resourceful.  Although the sometimes feels like a caricature—that is, not quite real, not quite genuine—he’s surprisingly astute in his observations and he’s wildly intelligent.  I’m always surprised by what he does and what he remembers.  He’s daring, he’s unexpected, which I found made Steelheart that much more interesting.

After learning that Steelheart has a weakness, I puzzled over what that might be.  Reading the prologue again, I couldn’t imagine how Steelheart was harmed in the first place; however, when David discovers how Steelheart can be harmed, when that moment of recognition and discovery blossomed in his mind and mine, I was absolutely thrilled.  I loved the conclusion.  It surprised me, yes, but I found the irony of the situation to be very satisfying.

Although I was a little put off by the gore, I really enjoyed Steelheart as a whole and I’m intrigued to see where Sanderson’s series will go.  I will definitely be visiting the other books in the trilogy.  Firefight is up next, followed by Calamity—and I can’t wait to dive back in.
Posted by BPL Ref at 9:15 AM