Next Year in Havana by Chanel Cleeton 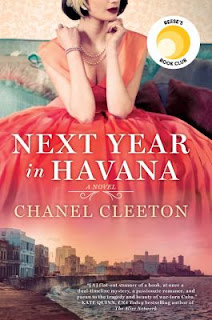 Reviewed by Christy
Marisol, a Cuban-American woman, is traveling to Cuba for the first time in her life to spread the ashes of her beloved grandmother. She grew up with endless stories of Havana from her grandmother and great-aunts but those were from before the revolution. Now that Castro is dead and travel restrictions are easing, Marisol tries to prepare herself for anything. But she doesn’t expect to uncover family secrets and fall in love.
Cleeton’s story is split between Marisol’s present day experiences as well as her grandmother’s in Cuba in 1958. Elisa, Marisol’s grandmother, falls in love with a revolutionary. She knows her sugar baron father would never approve so she keeps the romance a secret from her family and friends. When Marisol visits Cuba she too is attracted to a political activist, one who draws attention from the still controlling regime.
This story was just ok for me. I really enjoyed the Cuban history because I knew absolutely nothing in that regard but I struggled to connect with any of the characters. In both cases, the romance felt a little too immediate. The characters also speak in very long monologues that didn’t feel entirely realistic. I saw that a lot of people enjoyed this book in the book review community of Youtube so I suppose this is just one of those times a book doesn’t live up to its hype. However, it definitely wasn’t bad, and Cleeton has another book coming out that centers on Marisol’s fiery aunt Beatriz in 1960 which I am interested in checking out.
Posted by BPL Ref at 9:39 AM