The Magic Cottage by James Herbert 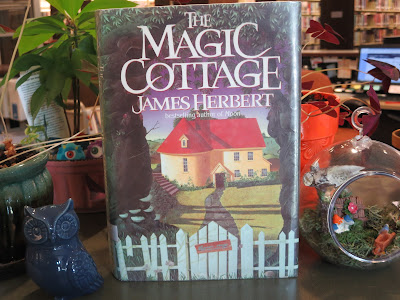 This book was recommended to me by a patron who commented, “They say he’s a horror writer, but I don’t think this is horror.”  Intrigued, I decided to give The Magic Cottage a try.

Musician Mike Stringer and his significant other, artist Midge Gudgeon, have toyed with the idea of a rural cottage from some time.  While their careers keep them both busy, they feel perhaps a change of scene would be good for the creative spirit—and keep Mike away from some unhealthy influences. Midge spots an advertisement for just such a cottage and they make inquiries, even visiting the place. Midge is instantly smitten, though Mike has some reservations: the ad said some repairs would be necessary and to his eyes, the repairs are more extensive than he had in mind. It doesn’t matter though, as the price quoted is beyond their means.

Except then it suddenly isn’t. Both Mike and Midge receive generous job offers that would more than cover what they need.  And at second look, even the repairs don’t seem as daunting.

Of course, as this all happens in the first couple of chapters and there is a lot of book to go, that’s not all that happens in the cottage known as Gramarye.

I agree with the patron who said she didn’t think it was horror, but then everyone’s definition of horror differs.  There are supernatural elements and a battle between good and evil, but I found it nicely unsettling and a bit creepy (in a good way) rather than horror.  For one thing, I enjoyed Herbert’s descriptions of the village, the forest, and the cottage itself.  Mike, our narrator, is a likeable guy, and he comes across as honest and dependable.  He adores Midge, who is also a genuinely nice person.  I was especially fond of the squirrel, Rumbo, who sort of adopts them, but then I tend to be fond of animal characters.  The supernatural elements were handled well and kept the pages turning.

If you like a bit of shiver in your reading  this time of year, The Magic Cottage might just provide it.
Posted by BPL Ref at 10:36 AM