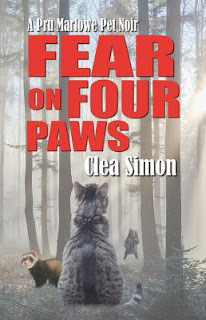 I always look forward to a new entry in the Pru Marlowe Pet Noir series. For the uninitiated, Pru works as a dog walker, animal behaviorist, trainer, and—more often than her on again, off again police officer lover Creighton would like—detective.  Pru has a bit of an advantage in some cases: she can communicate with animals psychically, an ability whose sudden and confusing onset caused her to check herself into a mental hospital.  It’s fear of being considered mentally unstable that causes Pru to keep her talent to herself, though Creighton has begun to suspect.

And while she can understand animal thoughts, the communication tend to be somewhat chaotic, to say the least, except from Wallis, Pru’s sardonic feline companion.

This time around, Pru has been searching for Albert, the local animal control officer, who is not the most diligent public servant (to put it mildly).  She finds him passed out cold and an illegally trapped bear near by.   She doesn’t figure Albert has the gumption to be the brains behind such an operation, but a new complication swiftly arises in the form of a dead human in the same vicinity.  Albert’s pet ferret, Frank, is a probable witness but Frank isn’t talking.

Angered by the thoughts of what was probably in store for the bruin, Pru starts to investigate but she soon has more than one complication on her hands: pets are disappearing from an upscale neighborhood, and Greg the local game warden is interested in offering her a job—and maybe something more.

As usual, the animals take center stage.  I always enjoy Wallis, whose observations on human life in general and Pru’s in particular, give the books some zest.  Pru is a complex character who is suspicious of most of the human race and especially wary of emotional entanglements.  She is more attuned and compassionate toward animals, who suffer not only physical hurt from humans but indignities: Growler, a bichon she walks on a regular basis, is called Bitsy by his human and treated more like a stuffed toy than a living creature. Despite being confined most of the day, Growler knows most of what goes on in the neighborhood and is a good source of information for Pru though he, like Wallis, is disdainful of Pru’s lack of awareness of all the things that go on around her.

However, I have to say that Bunbury Bandersnatch stole the show this time.

This series is often called a cozy, though that’s not the label I would give it.  It’s a bit darker and grittier, not to mention that Pru is no chaste virgin maid.  I think of it more as a straightforward mystery with a light dose of social commentary and a dollop of supernatural.  It’s an excellent series and comes highly recommended.

While I think any of the books in this series could be read as a stand alone, I am one of those people who likes to start at the first and read in order.  The other books are:

All are available from the library.

Full disclosure: I am acquainted with the author, but that did not influence my review.