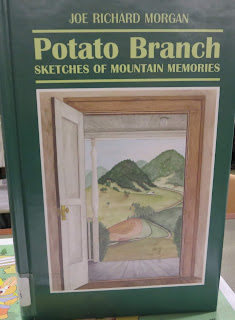 BPL Book Bingo takes us down paths where we might not usually travel, but we are often much enriched by taking those unforeseen directions.  Potato Branch:  Sketches of Mountain Memories by Joe Richard Morgan is one of those meandering trips down memory lane that I wouldn’t have picked up and enjoyed had I not been looking for a book set within 100 miles.

Having grown up in the Blue Ridge Mountains near Asheville, North Carolina, Morgan weaves many a fine tale of his boyhood and kindly shares them with us in this slim volume.
Pick this up and you will become acquainted with Morgan’s mother, father, grandparents, aunts and uncles, various neighbors, girlfriends, cows, mules, dogs, and many more unique characters.  Some memories are sad, but most will have you nodding your head and chuckling, even if you have never plowed a field, used a three seater outhouse, or gone to an old-timey revival church service.

One story that I particularly enjoyed concerned Morgan’s neighbor, Mrs. Pearl Robertson, and her 1938 black Plymouth.  The Robertsons had recently retired from city life and had never needed a car before moving to a rural area.  Mrs. Robertson got it into her head that they needed a car, and she, not Mr. Robertson, would be the one to drive it.  Morgan was volunteered to help her learn to drive, and was the passenger for many a jolting ride to town.  Mrs. Robertson had trouble coordinating her feet for easing off the clutch while pressing down on the accelerator, and eventually ended up in a tangle with a wire fence and a hayfield.

Young Morgan grew up and left the mountains for the Marines and later continued his education in Illinois and England.  He has made teaching and writing his career.  From beehives to Model T Fords to amorous bulls, Morgan knows how to spin a tale which will have you laughing out loud and turning the page for just one more chapter.
Posted by BPL Ref at 3:39 PM