House with a Clock in Its Walls by John Bellairs 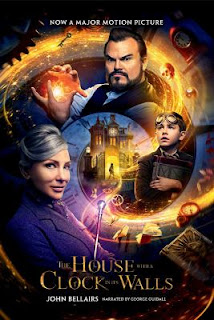 The year is 1948. Lewis Barnavelt, a shy, chubby, bookish boy, has just lost both his parents in an automobile accident.  Now he is on a bus to New Zebedee, Michigan to live with an uncle he’s never met.  His concerns aren’t exactly alleviated when Uncle Jonathan meets the bus wearing what appears to be some sort of robe, though his uncle assures him it’s nothing of the sort.  It’s a kimono.

His uncle’s house is just as eccentric.  It’s huge, rambling old mansion filled with clocks, books, and all manner of odd items—some of which seem to change unexpectedly.  Uncle Jonathan and his cookie baking friend, Mrs. Zimmerman, introduce Lewis to the fine art of poker playing, allow him to stay up all night if he wishes, and gives him free rein of the house.  Lewis is aware, however, that his uncle is keeping secrets from him, and wonders that Uncle Jonathan goes poking about the house at night, tapping walls and muttering to himself.  When his uncle realizes Lewis is on to him, he reveals that the house formerly belonged to a dark warlock and his wife, and that the warlock hid a clock inside the walls of the house and it seems to be counting down to. . . something. Something very bad.

And by the way, Uncle Jonathan is also a warlock and Mrs. Zimmerman is a witch.

This is the first in a wonderful children’s series by John Bellairs, one which I am ashamed to admit I only read recently.  In my defense, I did read and enjoy others by him in various series; I just never went back to where it all started.  At the time, I had some kids who would ask for scary books that weren’t, um, cheats.  You know the ones:  like Scooby-Doo, where the kids chase ghosts and demons and such, but they always turn out to be some guy (or woman) wearing glow in the dark paint.  Those are fine, but sometimes a reader wants a nice little fright that isn’t a fraud.  Bellairs fit the bill.

But the books aren’t dark and despairing.  They’re about almost ordinary people who fight evil and who use books and knowledge to do so.  Also there is usually a generational divide—a boy with a much older adult—but there is always a warm and supportive bond between the two.  Uncle Jonathan wants to protect his nephew but he doesn’t condescend to him.

The settings were another winner for me.  They’re always set some 60 or more years ago, and decorated by radio detectives, decoder rings, old automobiles, and vintage treats.

Topping it all off were the illustrations by the one and only Edward Gorey, which gives you a better idea than I can about the whole feel of the books: set in the past with ominous overtones, populated by  worried but kind people.

So I do recommend these to readers of all ages.  I know I’m going to go back and read the earlier ones I missed.

Note: This was prompted by the release of the film.  Some things were done very well, some less well, and some were downright puzzling.  (Why is it set in 1955, for example, instead of 1948?) I did enjoy the movie, and understood why some choices were made.  And in case you saw the movie and were wondering, much of the banter between Uncle Jonathan and Mrs. Zimmerman comes straight from the book.
Posted by BPL Ref at 9:57 AM