I Must Say: My Life as a Humble Comedy Legend by Martin Short 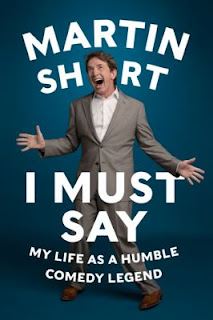 Reviewed by Christy
Previously I was kind of indifferent to Martin Short. I loved him in the Father of the Bride movies but didn’t really think about him other than that. I’m not generally a listener of audio books either but after seeing glowing reviews of his reading of I Must Say on Goodreads I decided to check it out on a whim. I thought, “Why not? I like comedy, and I can listen to it while I wash the dishes.” I also ended up listening to it on my way to work, while on my lunch break, getting ready for bed, etc. I loved it.
Short chronicles his life growing up in Canada with his parents and four brothers and sisters. They were a rowdy Irish family who argued over things like dark meat at Thanksgiving but still had the sense of humor to not only record such arguments but, in Short’s case, keep said recording for years and later on have his children reenact it as a holiday tradition. His beginnings in acting started with a Toronto production of Godspell. Though he’d spent countless childhood hours in his attic bedroom singing and performing, Godspell was where it really clicked. He had so much fun and met many colleagues who would become lifelong friends (including Eugene Levy, Andrea Martin, and Paul Shaffer) that he decided to give the acting thing one year to take off after college. If it didn’t, he would try to put his degree in social work to use.
Needless to say it worked out. His first big break was SCTV, a Canadian sketch comedy show that also helped launch the careers of Catherine O’Hara, John Candy, and once again Eugene Levy. Here he introduced his oddball characters like Ed Grimley who would later follow him to Saturday Night Live, though Short didn’t have much fun during his brief time on SNL. Movies were next and on the set of The Three Amigos, Short met one of his best friends Steve Martin, whom he is still friends with to this day. They even have a recent Netflix comedy special together.
While navigating the highs and lows of a Hollywood career, Short met the love of his life Nancy. They got married and adopted three children. They built a happy life filled with friends and fun times. Martin and Nancy became known for their annual Christmas party where guests were encouraged to perform a sketch or a song. Some, like Tom Hanks, took it very seriously and practiced for hours. Others reworked classic Christmas songs to roast their host to the tune of “Winter Wonderland” (“Marty throws a party just to sing.”) Through all this, Short slips in and out of his characters as well as some good natured impressions of his famous friends or favorite idols. And yes, he sings. Though I’m sure the written version is just fine, it adds another level to hear Short and the joy he takes in being silly.
Unfortunately not all of it is silly. Short’s life seems to be tinged with death. From the death of his beloved oldest brother when Short was only twelve to the death of both of his parents before he reached twenty one, it has shaped his life significantly. These parts, as well as the end where he says goodbye to a loved one yet again, are heartbreaking. I couldn’t help but cry.
Fortunately, Short has strong friendships to support him. It’s clear his friendships are very important to him, and the fact that so many of them have lasted for over thirty years is a testament to that. If the book had an overarching theme, the importance of friendship would probably be it.
Listening to I Must Say was a treat. It made me appreciate Short all the more and sent me down a rabbit hole of Youtube searches. It also got me interested in trying more audio books, especially comedic memoirs, which I’m excited to peruse.
Posted by BPL Ref at 10:04 AM