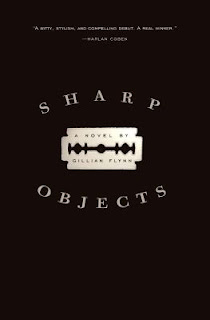 Camille Preaker is a lower tier Chicago reporter trying to prove to her kindly editor-in-chief that she does indeed have what it takes. It’s why she reluctantly accepts an assignment to travel to her small hometown in Missouri and cover the murders of two pre-teen girls.  Though her family was wealthy, and she was popular in high school, Camille has no desire to visit the place she left behind long ago. She doesn’t want to face her cold, distant mother. And she’s not confidant how well she’ll handle being in her childhood home – where her younger, beloved sister Marian died many years ago from a mysterious illness.
But Camille charges ahead ready to interview grieving parents, detectives, and neighbors. While she’s getting reacquainted with her hometown, she tries to reconnect with her mother Adora with little success. Though she is begrudgingly set up in her childhood bedroom in Adora’s Victorian mansion, there is little warmth to her welcome. She barely knows her thirteen year old half-sister Amma but soon learns there are two sides to her: the proper, doll-like side that she shows to Adora, and the wild, mean girl side that terrorizes the town.
To cope with her uneasiness, Camille drinks too much and itches to self-harm. She has inappropriate relationships with men in the town, and lets her sister steamroll her. In short, she’s a mess. I do think she is one of Flynn’s more sympathetic protagonists however. Flynn is really great at writing deeply flawed characters who can lean into “bad person” territory or outright be the queen of it. Camille isn’t necessarily bad, just kind of a disaster, which was fine by me even though I wanted to yell at her sometimes.
The mystery at the center of the novel is an interesting and creepy one. There are a couple of twists in the narrative – one I guessed, one I didn’t. While it’s not my favorite of Flynn’s novels, and it does take a little while to pick up steam, I liked it quite a bit. With HBO’s miniseries coming out this summer, I had to decide if I wanted to watch it blind or read the book first. I chose the book because so far I always enjoy Flynn’s writing, and I didn’t want to know anything going in. If you enjoyed Dark Places or Gone Girl, Sharp Objects is definitely worth checking out.
Posted by BPL Ref at 9:41 AM