A Dance for Emilia by Peter S. Beagle 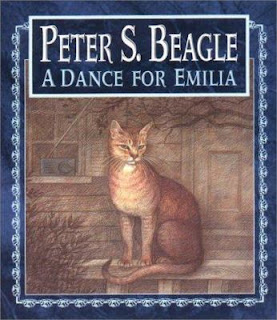 Sam and Jake have been friends since high school: closer than friends, more like brothers.   Both are drawn to the arts, Jake as an actor, Sam as a writer when his performing career doesn’t work out. Even though they live on opposite coasts, they talk once a week, visit when they can.  They’ve seen each other through marriage, divorce, failed relationships, bad jobs, dark nights of the soul, good times and bad.  Sam has been the one constant in Jake’s life.
And now Sam is dead.

He meets Emily, the young woman Sam had fallen in love with—Sam the cynic!—and finds she shares his deep grief.  They bond over their memories of Sam, each filling in the gaps for the other. Then it’s back to their lives and the new normal of a world without Sam.

Until one night, when Jake gets a frantic call from Emily. . . .

Beautifully written, this novella explores loss, love, and the possibility of what comes after.  It’s no surprise to find that Beagle wrote the book after the loss of a close friend.  It’s not one of those three hanky books in which a writer uses all the tricks to make the audience weep over a fictional character.  It’s moving, tender, thought-provoking, and at the end. . . well, I’ll leave the ending for the reader to decide.