A Tale of Two Kitties by Sofie Kelly 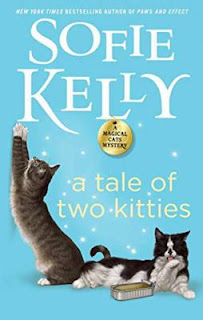 Librarian Kathleen Paulson has found a real home in Mayville Heights, Minnesota. She has a loving boyfriend, a job she enjoys, and many close friends.  One young friend is Mia Janes, who works with the library’s Reading Buddies program.  Kathleen meets Mia’s great uncle Victor at the library where he is looking for books to help him deal with some health issues.  It turns out that Victor is in town trying to mend fences with Mia’s family, especially her grandfather, after a long-ago family quarrel but his reception is a cool one.  Then Kathleen and Mia discover a body, and the police seem to think they have a strong suspect in Mia’s father, Simon.

Mia is desperate for Kathleen to prove her father’s innocence, so the librarian allows herself to be drawn into another investigation even if it may put her at odds with Marcus, her police detective boyfriend.  Kathleen does have something Marcus doesn’t:  two very gifted cats who seem to excel at finding clues.

This is the ninth entry in the Magical Cats Mystery series, but the first to appear in hardcover.  It would work as a standalone, but I have to say I have enjoyed watching Kathleen settle in and build relationships.  That to me is the real appeal of the series:  the strong relationships between the characters. Kelly isn’t afraid to allow things to change—there’s an impending marriage in this one—but she allows things to develop slowly.  The dialog especially is well done.  The conversations sound natural and there’s a good bit of humor.  The mysteries are good, but it’s the characters that make the series as much fun as it is.  I admit that I found the first couple were a bit slow going because of all the character introductions, but now they all seem like old friends.

And speaking of characters, two of the furriest are Kathleen’s rescue cats, Owen and Hercules.  While they don’t talk, the two have other talents such as becoming invisible or walking through walls and they seem to understand human conversation and are adept sniffing out clues—providing Kathleen keeps them in treats.

The Magical Cats books in order:


(Note:  Sophie Kelly also writes a series of mysteries under the name Sophie Ryan.  One of them was reviewed here.)
Posted by BPL Ref at 9:53 AM