The Life and Times of the Thunderbolt Kid by Bill Bryson 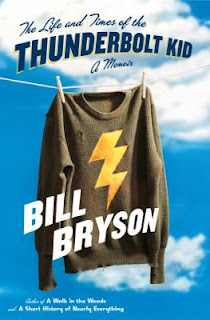 Most people know Bill Bryson as a travel writer of sorts, one who gives an extensive history of a place along with his experiences and does so with a good deal of humor.  His best known book may be A Walk in the Woods, which details his experiences walking the Appalachian Trail, but he’s also done books on England, the United States, and Australia as well as several other non-fiction books.

The Life and Times of the Thunderbolt Kid is Bryson’s account of growing up in Iowa in the 1950s.  Since that was my brother’s era, I gave him an audio version to listen to while he and his wife undertook a long drive, hoping it would keep them entertained.  My sister-in-law called to tell me that my brother laughed so hard she feared they might be stopped for distracted driving.

So when the BPL Winter Bingo started up and my sheet said “Read an Autobiography,” I knew just the book I wanted to read.

First off, true to form, Bryson isn’t just telling about his life; he’s explaining an era.  America’s obsession with the automobile was in full swing, and drive-in restaurants, movie theatres, and the like were popping up everywhere.  Atomic testing was going on in Nevada and was still something of a spectator sport; if you weren’t fortunate enough to live near a testing site, you could still get a bit of the thrill from reading comic books with titles like Atomic War! and Atomic-Age Combat. In schools, children were learning to shelter under a desk in case of a nuclear attack.   To size a shoe properly, the finer department stores had X-ray machines available.  According to tobacco company L&M, their cigarettes were “Just what the doctor ordered!” to soothe the nerves and sharpen the mind; Camel proudly ran ads proclaiming that more doctors smoked their brand than any other, perhaps as a way of implying that if cigarettes were healthy, then theirs were the healthiest.

Bryson discusses food, toys (some of the worst ever invented, but the section on Lincoln Logs was comedy gold), work (Bryson was a paperboy), and the mysteries of the opposite sex.  I found I remembered many of the things he described, although I had better memories of Silly Putty.  As I recall, we used it to make impressions of comic strips which one could then stretch and distort.  Why we considered this fun, I’m not sure; but I do remember buying lots of Silly Putty.  Slinkys, the coming of color TV, Hula-Hoops, TV dinners in aluminum pans, and reading about Dick and Jane are amusingly recalled.

Bryson’s recollections make this trip down memory lane a particularly hilarious journey.  His loving view of his Des Moines hometown and his family are peppered with sardonic humor.  His mother was a dreadful cook who always managed to burn anything and everything.  Fortunately, his father’s palate was attuned only to two tastes, burned foods and ice cream. “Theirs truly was a marriage made in heaven,” Bryson writes, “for no one could burn food like my mother or eat it like my dad.”

While those who grew up in 1950s and 1960s will take especial delight in this trip down Memory Lane, non-Baby Boomers should get a lot of laughs out of it as well and conclude that Bill Bryson is one funny guy.
Posted by BPL Ref at 9:29 AM