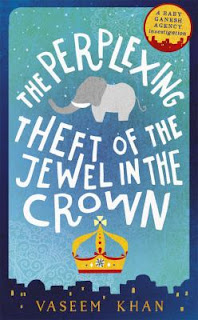 Inspector Chopra, lately retired from the Mumbai police force, is an unwilling visitor to a museum’s display of the British Crown Jewels.  It’s not that he doesn’t like museums or the British, but that his wife, Poppy, has succumbed to the mania surrounding an upcoming visit from Queen Elizabeth.  The traffic is dreadful, the lines are long, and security is so tight that it makes the pace wearily slow, but that all pales after the museum is robbed.  Although he has no official standing in the department anymore, Chopra is determined to help solve the crime—and even more so when a former co-worker is accused of being an accomplice. With help from another former colleague, Rangwalla, and from his atypical pet, a little elephant named Ganesha, he begins his investigation.

This was my introduction to the Baby Ganesh Agency series.  I was in the mood for something a bit exotic but not taxing and this fit the bill admirably.  Although I usually hold out for starting with the first in a series, I had no problem following this one.  The characterizations are well done. I especially liked Poppy, a modern Indian woman who knows how to get things done but who also mothers Irfan, a street boy who has been working for the Chopras.  The relationship between Chopra and Poppy is warm and respectful; they may have their differences at times, but they obviously love each other.  Most charming of all is Ganesha, the baby elephant who seems to have a nose for solving crimes.  He is portrayed as very toddler-like, bright and curious but also prone to sulking.  Both Poppy and Chopra dote on him as a surrogate child.

I do plan to read the first book in the series, The Unexpected Inheritance of Inspector Chopra, because it explains how he came to have Ganesha. That sounds as if it should be a fascinating story in itself—a mystery would just be a bonus!  The third book in the series is due out next year.

The author is of Indian descent, but was born and raised in England.  He worked in India for a decade before returning to London in 2006, which gives him a foot squarely in both worlds and gives him the ability to make his work accessible to both.  He has said that he wants readers to feel what modern India is like, and I feel he succeeded in large part. He also loves elephants, and that certainly shines through.  The first book has been optioned for a movie from an Indian film company.
Posted by BPL Ref at 9:02 AM