The Paris Librarian by Mark Pryor 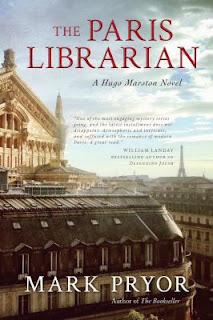 Hugo Marston, head of security for the American Embassy in Paris and former FBI profiler, receives a call from a librarian friend at the American Library. Paul Rogers knows that Hugo has an eye for collectable books and he has an interesting one he thinks Hugo might like.  When Hugo goes to purchase the book, he finds Paul in a locked room, quite dead.  It looks like natural causes, but there’s just something that feels wrong about the scene.  That feeling is magnified when Hugo discovers a young woman he’d met earlier who is researching an actress whose papers have been donated to the library—papers which were under Paul’s care and which someone, or perhaps several someones, seem determined to keep hidden.

This is my first Hugo Marston book, but it won’t be my last. For one thing, I really like Hugo.  He’s good at what he does—very good, indeed—but he also respects the abilities of others and works well with them. A good example is Lt. Camille Lerens, a French policewoman who works out of the serious crimes division: Hugo may suggest avenues of investigation, but her word is the final decision and he doesn’t try to undermine her. The same goes for his friends, including girlfriend Claudia. They come off as competent adults, not just supporting characters to make Hugo look good.

I also enjoy a good mystery that plays fair with the reader, and this one did. Having it as a locked room mystery in the grand old tradition (there are even secret rooms and passages!) was icing on the cake.

Finally, the Paris setting was well done.  There’s a sense of place without having the point belabored.

While I enjoyed this one and recommend it, there were times when I wished I had started with an earlier book as I had the strong sense that I would have understood more with some background.  Max, for example, is a friend and a good investigator but I think I would have appreciated his part more had I known more about him.  Lerens apparently has an extensive back story, explained succinctly but intriguingly at one point, and Merlyn had a large part to play in a previous book.

I do intend to remedy these gaps in the near future. Anyone looking for good, solidly plotted mysteries with well-developed, interesting characters and international settings should find this series to be a winner.
Posted by BPL Ref at 9:03 AM