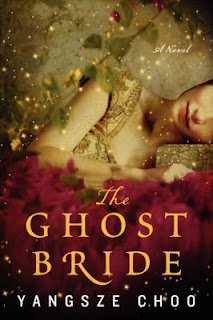 
Li Lan, a young woman from an impoverished aristocratic family, stands to inherit little from her dissolute father and her marriage prospects are dwindling each year.  But, suddenly, Li Lan finds herself confronted with an unusual proposal from the wealthy Lim family:  they want her to become a ghost bride to Lim Tian Ching, a young noble who recently perished under mysterious circumstances.  Ghost marriages are uncommon, even in the sleepy port town of Malacca, but the wealthy Lim family is desperate to appease the spirit of their deceased son.

Despite the wealth she stands to inherit, Li Lan has no interest in becoming a bride to a ghost.  Haunted by Lim Tian Ching, her ghostly would-be suitor, and her growing attraction to Tian Bain, the Lim family’s new heir, Li Lan must fight for her freedom—and possibly her very soul—if she ever hopes to escape the clutches of the dead and marry the man she truly loves.  In this haunting debut, Yangze Choo takes readers on a marvelous journey through the Malaysian spirit world and the frightening underworld that exists just beneath the surface of Malacca.

I originally picked up The Ghost Bride on a whim.  I’d noticed a discussion thread on Goodreads which mentioned it and, after reading a quick synopsis, I found my interest piqued.  It qualified for my Read Harder Challenge and it sounded like a great story, so I thought, “Why not?”  And I’m very glad I decided to give it a chance, because I was pleasantly surprised by Yangsze Choo’s novel.  The more I read it, the more I loved it—and I quickly became entangled in the complicated relationships of Malacca and the ethereal spirit world that overlapped the city.

Detailed and intricate, The Ghost Bride was a fascinating and fantastical journey through Malaysian society of the late 19th century, a romp through the afterlife and funeral rites of the British colony.  I loved the history, the myths, the ceremonies and legends of Malaysia quietly woven into the story.  It was a beautiful narrative that crafted an eerie, but entirely unique afterlife, an intriguing story riddled with incredible imagery of a ghastly spirit world and strange, ghostly creatures.

It’s a bit of a dark, creepy story, a frightening fantasy that tickles at the mind and breeds doubt.  I was often left wondering how it would end:  would Li Lan escape her ghostly tormentor?  Would she be able to avoid the hungry ghosts, or would she fall into some malevolent spirit’s clutches?  It’s a story that kept me on the edge of my seat, but it also managed to give me chills.  I loved the ethereal qualities of the spirit world Li Lan encountered, like the ghosts which seemed intangible like a puff of wind or the paper funeral gifts that had a faint, fluttery quality.  I found the descriptions lovely and brilliant, and I constantly wanted to learn more of the strange and deadly underworld lurking just beneath the surface of Malay.

And, speaking of Li Lan, I thought she made a lovely narrator.  She’s a curiously free-spirited and progressive young woman, but she’s also a reflection of her society’s beliefs and expectations.  She’s living in a time of transition, when Malay is a colony of Britain in the late 19th century, so there’s a confluence of Malaysian traditions, Chinese folklore from next door, British exploration and industry that gives The Ghost Bride a unique flavor—and gives Li Lan a very unique perspective.

For this reason, she makes a wonderful storyteller.  She gives explanations about her culture, insights into her city and country without overwhelming the reader or, more importantly, compromising the flavor of the novel.  It may offer many explanations, maybe even more than strictly necessary, but it manages to give me a better image of the world which Li Lan inhabits.  It’s a complex, fascinating story full of plot twists and family secrets and traditions I don’t usually encounter, so I appreciated Li Lan’s ability to skillfully weave an intriguing tale and appropriately explain the things which I didn’t always understand.

I loved every minute of The Ghost Bride.  Granted, I thought the ending was a little unexpected, but, ultimately, I was pleased with the outcome—and, more importantly, Li Lan’s decision.  And, yes, it did get a little confusing, because I’m not familiar with the myths, cultural expectations, or beliefs of colonial Malaysia; however, I didn’t let my lack of familiarity deter me.  I was rewarded with a scintillating story rich in Malaysian myth and culture, a story so wholly unique and fascinating I couldn’t help becoming enthralled.
Posted by BPL Ref at 5:34 PM