Into the Grey by Clea Simon 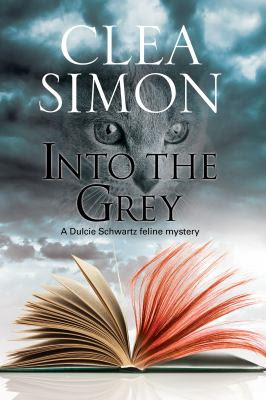 At long last, Dulcie Schwartz seems on the verge of finishing her dissertation:  she’s polishing the penultimate chapter, one she thinks might be good enough to submit to a prestigious journal, and has been encouraged by her advisor to add material based on one of her recent discoveries.  Then a professor who has just joined her thesis committee writes a scathing critique of her work, and her chances of finally graduating in a few months dwindle.  To top it off, he has restricted access to the very documents she needs to finish! No wonder Dulcie is angry enough to threaten to kill Dr. Fenderby—and no wonder that the police see her as a person of interest when the professor in question turns up dead.

Even worse, Dulcie finds herself on disciplinary probation, meaning she has to stop work on her degree, loses her teaching assignment, and is cut off from most of the university.

But there were others who would have had reason to wish Fenderby ill—or do more than wish. After all, someone did beat him to death with a book….

I always have a bit of difficulty deciding how to describe this series and do it justice. It’s not a Gothic, though that is Dulcie’s field of study; it is indeed an academic mystery, but some would take that to mean “dry and dusty,” which it isn’t.  There are supernatural overtones—Dulcie feels a psychic connection to the eighteenth century author she’s researching, and she often “hears” her dearly departed cat, Mr. Grey—but again, this isn’t a supernatural mystery. There are cats (almost always a plus for me) but it’s not a cat mystery in the vein of “The Cat Who” by Lilian Jackson Braun or the Joe Grey series by Shirley Rousseau Murphy.  For me, a new Dulcie is like coming home and slipping into a pair of old jeans and a comfy t-shirt.  It’s time to relax and enjoy a visit.

So why do I like this series?  First off, I like Dulcie Schwartz, our heroine.  I like character-driven stories in general, and Simon has done a wonderful job of creating a character who has grown and changed over the course of the series.  Dulcie is a graduate student who is working her way through her dissertation but who tends to get a bit sidetracked—well, okay, more than a bit.  This dissertation has morphed into work that may rival the Encyclopedia Britannica unless Dulcie can bring herself to stop researching and start writing. She also sees herself as an eminently sensible and practical when in fact she has much more in common with the Gothic heroines she studies, giving in to impulsive behavior and jumping to unwarranted conclusions—and don’t forget, she believes she’s in contact with the spirit of her late cat.  The impression is heightened by the snippets of (to us) wildly overwritten passages from the pages (“Goblets o’erbrimmed with Blood, the noble Ichor…”) but which often contain little clues concealed in the wording that either will reflect Dulcie’s mood or draw attention to a circumstance.  Dulcie comes by her tendencies honestly:  her mother, a long time commune member, calls to deliver cryptic messages from the ether, all of which Dulcie dismisses without a hint of irony as being too fanciful.  The fact that I find Dulcie so appealing is a real testament to Simon’s skill at characterization. I usually have very little patience with heroes or heroines who go off half-cocked, but with Dulcie I just imagine Mr. Grey and I are sitting on the couch, watching indulgently and bemusedly as she rushes in where angels fear to tread.

I like the whole atmosphere of the books: going down deep into the stacks of the library and the almost claustrophobic feel, like going through catacombs, to pan for literary treasure in the scraps of manuscripts. I like the supporting cast, folks I’ve come to know over the books and some of whom, unlike our Dulcie, have actually gone ahead and, um, graduated. It’s no surprise that I like Thomas Griddlehouse, the librarian, who understands and shares Dulcie’s passion for older literature, even though his demeanor is strictly old school professional. Finally, there’s the long-suffering Detective Rogovoy who has a soft spot for Dulcie even when she’s trying to convince him of her latest theory.  What a patient man…

I loved that when Dulcie hears that the murder weapon was a book she immediately wonders which title it might have been… because that was my reaction, too. I also love Dulcie’s shock and indignation when she discovers a book is shelved incorrectly, which is only heightened by the lack of reaction of outrage from the police.  Don’t they understand the implications?

At this point, I’ll beg indulgence for a story. A long time ago, the library had work study students who came in for some months and did things like shelve books.  Many were quite good, but a few were, shall we say, a bit less dedicated. One such young lady came to me to help her find a book she badly needed for a class.  I remembered the book.  I had seen it on a truck she had been shelving a couple of days before.  It was not in its correct spot and in fact I didn’t find it until about two months later.  I am quite the fan of poetic justice.

In short, Into the Grey is a bit like a trip down memory lane for me.  I get to wander the halls of academe, hang out with friends in my department, solve a mystery, and play with cats.  Best of all, there’s no homework and no exams!