The Cat Sitter’s Whiskers by Blaize and John Clement 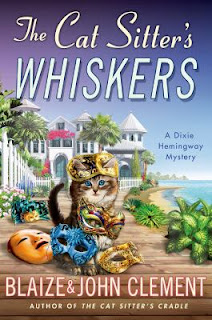 Dixie Hemingway—no relation to you-know-who—gave up her job in law enforcement after a family tragedy and now earns her living as a pet sitter on Siesta Key, Florida.  The problem is that while Dixie is no longer with the police, crime still has a way of finding her.  This time, she’s taking care of a mischievous Maine Coon cat named Barney Feldman but it certainly wasn’t Barney who conked Dixie on the head when she came to the house. Dixie reports the incident as a break-in, but nothing seems to have been taken even though the house has a lot of expensive items, including a valuable collection of antique masks.  The police think that perhaps Dixie passed out and hit her head.

The only one witness was Barney Feldman.  And Barney isn’t talking.

For those unfamiliar with the series, the Cat Sitter books are an interesting blend of cozy with grit. On the one hand, there can some messy deaths but there’s no wallowing in graphic detail.  Dixie does tend to rush in where angels fear to tread at times, but she’s also a strong character who has had some training in dealing with emergencies, making her interventions more plausible.  She may have been broken a bit by fate, but she’s working her way back.  The pet sitter angle is well done; Dixie tosses out a pet care tip or two and obviously cares about the animals but maintains a business like attitude.

This is the tenth book in the Cat Sitter series, but only the third for John Clement who took over writing up Dixie’s adventures after his mother Blaize passed away.  I had enjoyed the previous two but had a vague feeling that something was missing.  All the familiar characters were there, all the expected trimmings, but somehow it felt a bit by the numbers.   This time, however, I think John really found Dixie’s voice all the way through

Part of the appeal of almost any series, mystery or not, is finding out what’s going on with the characters’ personal lives. Recently, Dixie embarked on a new romance but still carries some heavy personal baggage.  Some of the reoccurring characters are fleshed out a bit more this time, and Clement creates some memorable new ones. The animals shine with their own personalities, which is part of the appeal for me.    The primary mystery plot was a bit slow building as Dixie found herself a bit sidetracked by her personal life, but there were a couple of particularly nice twists this time around which made it all worth the wait.  Some I saw coming, some I didn’t.

I usually advise people to start with the first of any series, and while I would suggest that you do so with this one as well but I don’t think folks would have any trouble just diving in with this one.  If you haven’t read any of Dixie’s adventures recently, then I think you’ll find yourself right at home.
Posted by BPL Ref at 10:08 AM