Reported by Don and Ambrea

This week at Nevermore, our readers revisited psychopaths with a new book, The Psychopath Test by Jon Ronson.  The Devil in the White City by Erik Larson continued to enthrall our readers, receiving  high ratings for another week.  Readers also did some geographical exploring with A Day in the Life of China, Unruly Places, and The Strangler Vine which premiered earlier this year. 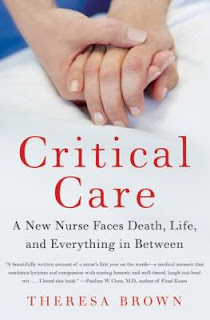 First on the list, our Nevermore readers looked at Critical Care:  A New Nurse Faces Death, Life, and Everything in Between by Theresa Brown.  Brown, an oncology nurse, shares in her memoir the experiences of her first year in nursing.  She sheds light on the trials and tribulations, the issues of ethics and morality that come up within the nursing profession, and the difficulties and triumphs that all nurses face at some time in their career.  According to our reader, it was more of a “niche title,” probably appealing to readers most interested and/or working in the field of nursing, but it was an interesting book to read and, overall, our reader was pleased. 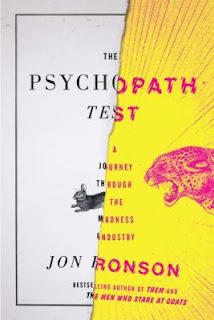 Next, one of our readers brought The Psychopath Test:  A Journey through the Madness Industry by Jon Ronson.  Ronson, who is the author of The Men Who Stare at Goats and Them:  Adventures with Extremists, decided to investigate the world of psychology and psychiatry, specifically the “madness industry.”  After meeting an influential psychologist and uncovering many of the characteristics of high-functioning psychopaths, Ronson explores the world of madness from diagnosing psychopathy to exploring the roots of advanced therapy to understanding serial killers.  Our reader preferred The Men Who Stare at Goats, but The Psychopath Test proved to be an unexpected treat, being both funny and engaging. 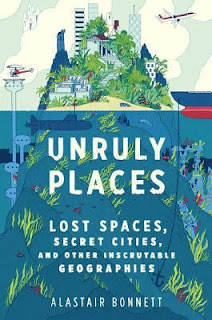 Our readers also explored Unruly Places:  Lost Spaces, Secret Cities, and Other Inscrutable Geographies by Alastair Bonnett.   Bonnett “goes to some of the most unexpected, offbeat places in the world to reinspire our geographical imagination.”  In his book, Bonnett investigates and writes about a variety of places, such as Sandy Island, which didn’t exist two years ago, or Sealand, an abandoned gun platform off the coast of England which a British citizen has claimed as his own sovereign nation, or Baarle, a town where walking in the supermarket means crossing international borders.  According to our Nevermore reader, it was a great collection of short essays on interesting locations throughout the world.  Bonnett shows how geography changes—and how the world still has some of the most extraordinary places to explore. 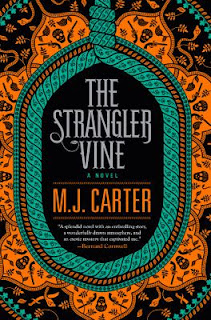 Last, one of our Nevermore readers volunteered The Strangler Vine by M.J. Carter, the first book in the ambitious Blake and Avery series.  In 1837, William Avery  is a young British soldier in colonial India and Jeremiah Blake is a political agent who has become disenchanted with British rule; both become entangled in a wild goose chase, only to become sucked into a much more dangerous—and deadly—mystery than they ever believed possible.  For our Nevermore reader, it was a fairly interesting novel with its references to the East India Company, Sir Arthur Conan Doyle and Sherlock, and Indian culture of the 1830s.  (The Infidel Stain, published earlier this year, continues the story of Jeremiah Blake and William Avery in London.)
Posted by BPL Ref at 5:13 PM