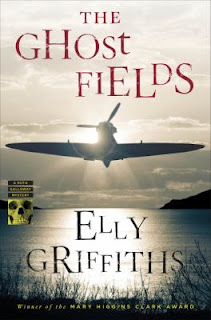 There are mysteries and then there are mysteries.  Finding a WW II aircraft buried in an English field is certainly noteworthy.  Finding a body in the pilot’s seat with a bullet hole in the skull ups the ante considerably and brings in the police as well as forensic archaeologist Ruth Galloway.

So begins the seventh book in Elly Griffiths’ marvelous series.  As usual, there are numerous entanglements along the way, as the body turns out to have been someone related to the prominent Blackstock family.  Not only do they own the field, but they lost a son in the War. . . except that he was supposed to have been lost at sea. If it is him, how did his body get inside an airplane in a field so far away?

There are personal complications for Ruth as well.  Not only is her former lover, DCI Harry Nelson, investigating the murder, but an attractive American filmmaker is on hand to film a documentary about American pilots in WW II Britain. He and Ruth have dated in the past but lost touch.  It sounds so tawdry doesn’t it? But somehow it isn’t.  It’s just very human, and that means complex.  Harry is a happily married man who loves his wife.  He is drawn to elements of Ruth’s personality and bound to her by their daughter and yet he would never consider leaving his wife.  Ruth doesn’t expect a future with Harry. She longs for a relationship with a man but she wouldn’t sacrifice who she is to have such a relationship. Characters are conflicted, they make mistakes, and they grow.  I always enjoy the time I spend with them.

I look forward to an Elly Griffiths book because I know I can expect a strong mystery plot as well as fascinating characters.  Ruth especially is a wonderful creation: she’s strong and independent, but quite aware that she doesn’t always fit in.  She’s a large, somewhat awkward woman who may lack fashion sense but she is more than competent in her chosen field.  She loves her daughter and her work, and like many modern women she is sometimes torn between the two.  Griffiths herself does a balancing act in advancing her characters’ lives and relationships while never losing sight of the current intriguing mystery.  The writing is understated, with a lovely dry humor.  One thing that I really enjoy is that while characters may do some soul searching and some agonizing, they don’t wallow in misery.  Life is to be examined but it’s also meant to be lived.

I also enjoy that, in addition to the present mystery,  each book has a past mystery to be solved, one that may have occurred fifty years ago or fifteen hundred.  Ruth is an archaeologist, after all.  Many of the present day mysteries in the books have their roots in the past or may serve as a reminder that human behavior has not greatly changed over the centuries.  In addition to the history aspect, there are often elements of folklore in the mix.

The books don’t have to be read in order, though the complex relationships are better understood if you do.  A new reader was taken aback by “all the affairs,” a comment which puzzled me until I stopped and took stock.  I’ll concede she had a point, but because Griffiths has carefully plotted these relationships and let them unfold over the entire series it doesn’t feel as if it’s excessive.

The series order is:

The next book in the series won’t be out until 2016; the working title is The Woman in Blue.   However, Griffiths has another book coming out this year, which is the start of a new series.  DCI Edgar Stephens served in WW II with a special ops unit known as “Magic Men.”  Their specialty was using stage tricks to confuse the enemy.  Now he has a murder case to investigate—and the crime scene makes him think of a magic trick gone horribly wrong.  The title is The Zig Zag Girl and, yes, I’m putting my name on the reserve list!
Posted by BPL Ref at 11:22 AM